“Mao Tse-Tung: The Greatest Revolutionary of Our Time”, propaganda film from the 60s according to his followers 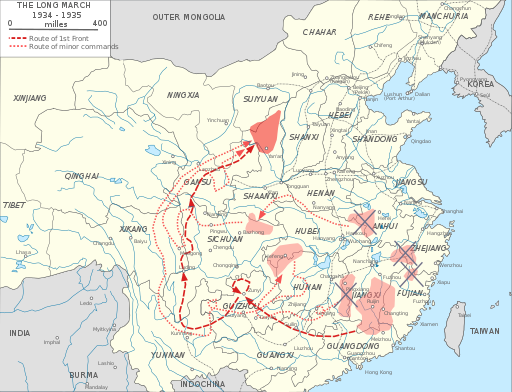 Single Spark Films, which says it is not the same as Single-Spark Marist-Leninist Archive, posted in early 2014, the grainy film “Mao Tse-Tung: The Greatest Revolutionary of Our Time”. He is also known as Mao Zedong.

The footage starts in 1949, when the Chinese communists have thrown out the “Japanese imperialist”   But soon the hostility was toward all western, especially US, capitalism.  Mao believed that the Soviet Union, under Khrushchev, was slouching toward capitalism.  Maoism became the Chinese variant of Marxism-Leninism. The film mentions some historical experiments, like the Paris Commune of 1871.

The film mentions The Long March and the Great Leap Forward before it covers the Cultural Revolution which started in 1966 and was particularly punitive of the intellectual “elite” who could not work with their hands.

Personal identity was to be achieved only in the mass, not the individual.

Wikipedia embed of the route of the Long March, click for attribution.