"Not Done: Women Remaking America": Hour-long documentary about the women's (and Me Too) movements during the Baby Trump years 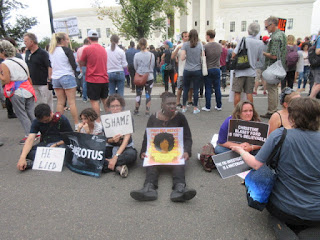 “Not Done: Women Remaking America”, directed by Sara Wolitzky, from PBS, is offered by Amazon for $5.99 (HD) or as part of a PBS package.

The 55-minute film traces the progress of feminism during the Trump administration.

The film starts with the overwhelming Women’s March on Jan. 21, 2017.  The march was so crowded that I could not get into the Ballston Metro Station in Arlington to go to it.

It moves on to trace the work of Alicia Garza, with her emphasis on super solidarity, “all of us or none of us”, and her role in founding the Black Lives Matter movement, after the acquittal of George Zimmerman in 2013 for his killing of Trevon Martin in Sanford, FL (I remember the Saturday night the court decision as I left on a trip to Oak Ridge the next day), and then the death of Michael Brown in Ferguson MO in Aug 2014.

It then moves trace the Me Too movement, back thru the fall of Harvey Weinstein, and then others, leading to the testimony of Ms. Ford at Kavanagh’s confirmation hearing in 2018. The film pays a nod to trans people, but doesn't acknowledge the tension between trans women and biological women (as in sports).