"Seedling": what it means if the power goes out, electronics fail, and alien blobs appear 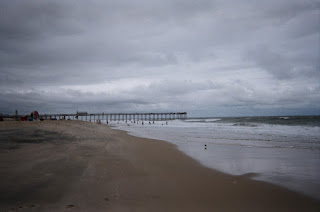 On the Dust channel on YouTube, Stevie Russell has an interesting short film “Seedling”.

On the English coast, a young married couple with a pregnant wife endure a severe storm with lenticular clouds.  Cell service goes out, and she can’t start her car, which suggests possibly an EMP attack or maybe a very severe geomagnetic storm from a coronal mass ejection.

The next morning the couple is on the beach (like in the Nevil Shute novel). She sees an air-floating alien, looking like a shape-shifting mollusk pass by.  Then, the TV and radio come back on inside, and her car fub will start the car.

Then they learn that the aliens appeared only to pregnant women. Is this a variation of "Rosemary's Baby"?  There is a problem that short films like this really seem like incidental gimmicks, that don't get to probe into the consequences of these dilemmas.