"No Clothes": witty gay male satire set in an East Village laundromat (and apartment building) about what really matters 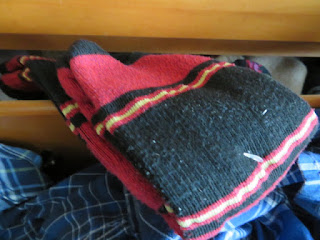 Hugo Kenzo presents a 10-minute short LGBT film “No Clothes”, based on a laundromat encounter (not the first time in the movies) that allows some layered satire. As a 2020 festival film, I wondered how people behave in laundromats now during the pandemic.  You would think they would have to go back to their apartments or wait outside.  But then are their clothes safe?  Ask Thomas Carlyle ("Sartor Resartus").

In a big coin laundromat in the lower East Side in NYC, Alan (Jordan Firstman, as “hairy”) meets Joseph (Tony Lewis, “thmooth”).  While Alan waits for his clothes to finish, Tony disappears.  When Alan goes to the clothes dryer, he finds his clothes gone.  A homeless woman says “don’t worry, your friend took them”.

Alan finds one of his socks in front of a brownstone walkup near Baxter Street, goes up the “Vertigo” staircase (it’s a rather obvious reference to Hitchcock and seems a little trite now) and lets himself into Tony’s apartment with a credit card. (It’s that easy to break and enter.)

But, there is a kind of reconciliation.  Maybe it’s payback, maybe its universal social justice.

I once had a “trick” (back in NYC) in 1978 take money and leave my wallet in the bathtub.  He didn’t mean to harm me.  He was just that desperate.

You wonder, however, whether superficial personal appearance does matter for casting parts sometimes.