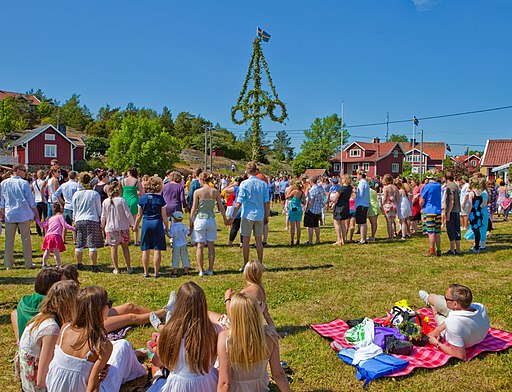 “Lockdown Lite: Sweden’s Model for Coronavirus Control”, from ABC News-in-depth, which now seems to be producing some festival-ready short film documentaries (like for 2021 Oscars, everything debuted online).

The film traces the “Guioco Piano” approach to controlling the pandemic, leaving things open, and up to personal responsibility. The result is six times as many deaths as in the surrounding Norway and Finland, with a very heavy concentration of deaths in homes for the aged.

The immigrant communities are particularly hard hit because they tend to live together in large extended family groups.

The film shows people, many of them immigrants, going into health facilities and getting antibody tests and being told that they’ve had it already.

Picture: Midsommar in Sweden (not the movie), click for CCSA attributes, Wikipedia.