"A Day at the Zoo", by Avi Schiffmann 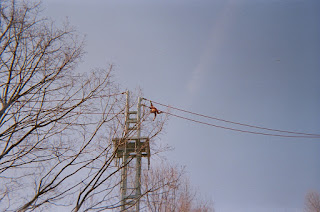 The last times I went to the zoo were in February of 2014 (as I remember), and then March 2007, to Rock Creek Park in Washington.  In the more recent case it was to “meet” Ollie the Bobcat, who had escaped but returned on her own volition.

So Avi Schiffmann (who set up the Ncov coronavirus tracking database, one of the world's largest) make a 3-minute short, “A Day at the Zoo”.  An early scene shows him driving an underpass in Seattle.  I remember driving that exact stretch two or three times in rental cars in the past.

“Zoo” is a metaphor.  When there were production problems in the IT workplace, we used to say “what a zoo!”.

Picture above:  Orangutan at the Washington DC zoo, 2007.

Here Avi looks at some of the more developed animals, like other primates. His film clips elsewhere online (like drone tours of his "home field advantage" area) are interesting.  There is some moog music in the background, but not Saint-Saens "Carnival of the Animals".