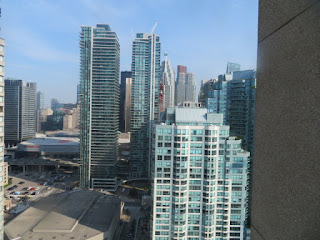 “The Other Side of the Box”, by Caleb L. Philips, from Short of the Week.

Ben (Nick Tag),  and Rachel (Teagan Rose) are a nice young couple celebrating Christmas Eve (probably in Toronto) when an old rival Shawn (Josh Schell) delivers a present, an open box with a black mass filling it (no pun).

It is rather like an analog black hole (which mathematics predicts); if you throw anything into it, the object disappears. But then a decapitated head protrudes.  The gig is that someone has to watch it (stare at it) at all times.

Then when Ben goes on excursion to the basement to see what lies beneath, it gets interesting.  Maybe Ben is a virus himself, with multiple copies.

There was a horror feature in by Richard Kelly “The Box” (Nov. 6, 2009) with a somewhat related premise.