"The Den": a motorist find an actress with amnesia in a storm, and takes her to a bar for help, and finds out they already have her trapped 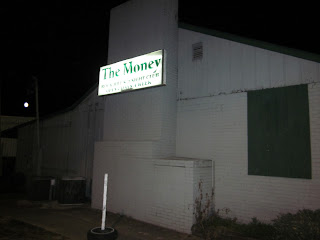 A man, driving in a thunderstorm at night, almost hits a woman on the road. He takes her to a quiet bar, “The Den”, for assistance.

But the people in the bar seem to be a cabal running a business that may have involved her (maybe trafficking).  She says she is an actress, and she doesn’t know who she is, and that is a paradox here.

But things will indeed come to a head. There is a bit of Tarentino in this film. Directed by Iago De Soto.