"Is Death Final?" from the "Closer to Truth" series 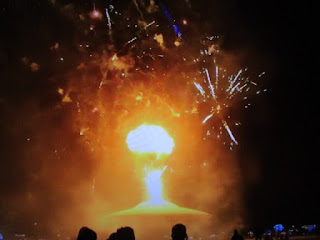 “Is Death Final?”  This 26-minute interview is Episode 1306 of a series “Closer to Truth”, with Robert Lawrence Kuhn.

I would say, it doesn’t make sense that you wouldn’t know you’ve passed away and can never return.

The interview compares two ideas:  your replacement in another universe, and your resurrection, as understood in various interpretations of the New Testament.

In a “resurrection” a continuation of your old sense of self.  I doubt it.  It is sort of a “rebirth” with the “no spectators” (or “Burning Man”) mentality (like the Netflix movie). You have to accept a certain Tolkien-like fellowship with others and realize that truth is no longer your own. It is very much a "group activity" and about comradeship, even belonging to what seems like a cult and that eliminates individuality as you're used to it. You have agree to help make certain failures of others "all right".  I'm not sure I'm in that space right now.

If I were to get Covid19 and die of it, right now, I would want to own it, the moral responsibility.  That’s because of my past privilege relative to what I could earn. No funeral, no obituary, no recognition.  Resurrection is something you have to want.  At the moment, I’m not sure I would be game for it.  I want to see people be the best they can be as individuals.  If I let go of that, I feel they won’t, even if it is not my call to make.

So I would have to “change”.  But I cannot accept someone else’s order and revolution imposed on me. Things are taken away from people all the time (as sometimes even with revolutionary expropriation), but a lot of time they really hadn’t earned what they thought they had.  They came at someone else’s expense or risk.  Call it karma. The political extremes want to make this a matter of identarianism.  I don’t.  Yet the desire to see personal purification can lead back to at least a soft fascism.

I do have ideas how I fit in as COVID and BLM resolve, some rather specific plans.  But they have to resolve “satisfactory”, reasonably.  There is no guarantee that they will.  So I could, at age 76, already be in a kind of living purgatory, an epilogue that sounds like a soft ending of a big symphony rather than a militant triumph.

There is evidence that "consciousness" survives brain death for some time (not certain if destruction of the brain by explosion or later cremation stops it).  So it matters if loved ones are around even if someone is in a coma.  Sometimes lucidity returns at death.  But then there may be the attempt to find a place in a larger group to belong to.