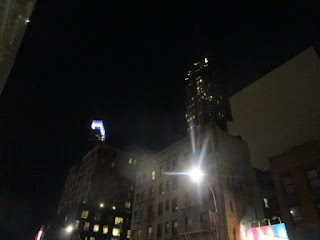 He shows an apartment in Brooklyn, with seven people living in it (imagine the hygiene rules now) with a skareboard rink built onto the floor.  Tim Pool would be ecstatic.  (Pool assembled one from a kit for his home in New Jersey.)

He says the cost of rent can be three times less (that’s hard to believe.)

The shows some scenes from Bed-Sty, which were somewhat spared by Hurricane Sandy.

I remember Brooklyn Heights well, with its Barge Music.

The D Train goes right through it, in a sink without being covered.

I don't know if this is the right picture, but I attempted to select a night picture near Atlantic Ave. subway station near the Brooklyn Academy of Music, April 2018.