Chemistry set art work: "Recreating One of the Weirdest Reactions": a solution shimmers in patterns and then turns to coca-cola 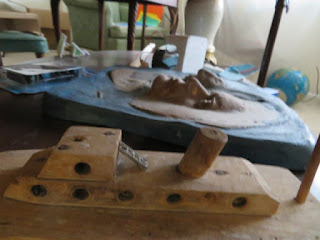 “Recreating One of the Weirdest Reactions” reminds me of an old art project in New York by Stewart Lamle back in the 1980s, mixing odd paints and chemicals to get bizarre recursive patterns to put on fabrics.


Science teacher (?) Tim Kench, on a YouTube channel by NileRed, presents an interesting experiment that creates a solution with recursive patterns (fractal, almost Mandelbrot-like) in reddish colors, like a design – that get overridden by bubbles and turn blue.

This would make chemical art work for a museum.

The chemicals include sulfuric acid, and complicated oxidated salts with iron and bromine, and one organic acid. But the experiment would probably appear in an undergraduate course in advanced inorganic chemistry (or descriptive inorganic).

When I was a senior in high school, I accidentally got a little bromine on an index finger.  If formed a dark sliver of a burn that took about three months to heal completely.

Jack Andraka’s book “Breakthrough” (Book reviews blog, March 18, 2015) has an appendix with some home experiments (like making a lava lamp) that are simpler and safer than this.  Nevertheless, this film demonstrates the possibility of chemical abstract art.