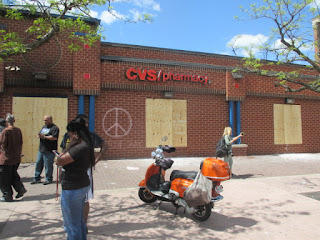 Monday, May 8, 2017, PBS Independent Lens showed a reduced version of Brett Story’s “The Prison in Twelve Landscapes”.  The PBS site is here.   The production company is Of Ratface.  The official site is here  and the film was produced with Canadian resources, and aired in a few festivals like Doxa.

This was billed as a film about the effect of incarceration on surrounding communities, but it turns out to be bigger.  It is a stunning indictment of the hidden racism festering during Obama’s presidency, glossed over by political correctness.

The opening section shows a man, himself a former inmate, in the Bronx packing food and sundries for prisoners in upstate New York, explaining the arbitrary rules for what prisoners are allowed.

The next section showed how prison had replaced coal mining for an eastern Kentucky community, as a source of jobs. One man considered mountaintop removal as a boon, as a flat land is at a premium in Appalachia; an airfield and prison had been built on an area that had been leveled by 200 feet. There was an interesting rail viaduct that I don’t recall seeing even though I have driven in the area.

The next location was Washington Square Park in Greenwich Village in New York City, about six blocks from where I used to live in the 1970s (in the Cast Iron Building).  An elderly black man was teaching a girl chess.  Many spend games were shown. The man explained how chess is an important past time in prison and some inmates get very good at the game.  I don’t recall that United States Chess Federation has discussed this publicly, even though I have been a life member since 1965 (USCF used to be in the antique district across the street from the Cast Iron Building).  The Marshall Chess Club is nearby in Chelsea.

The film then moved to the locations of the protests.  It covered started out with a St. Louis County judge explaining that the media is not allowed to film at trials, showing a lack of transparency. Then the film dissects how the many little jurisdictions use harassment of African Americans to intimidate them into paying fines.  One woman went to "garbage jail" protesting a fine for leaving a trash can open.  (I’ve never heard of such a thing.)  Another black girl was arrested for no ID when she wasn’t even driving the car. The film shows the location on Canfield Ave in Ferguson where Michael Brown was shot by Darren Wilson on Aug. 9, 2014.  Despite the prevalence of the Democratic party in the county, the government is said to be quite racist.  This section of the film presented an outrage with which I was not familiar. 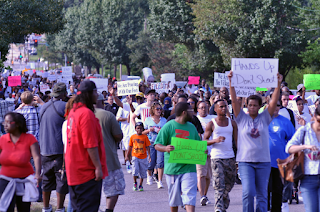 The film then shifts to Baltimore, showing the demonstrations after Freddie Gray in Sandtown, with the CVS store that as torched but is now re-opened.  (A former gay bar, the Hippo, became another CVS store in Baltimore on Charles St. in the Mt. Vernon area.)  Familiar faces (from the gay community) appeared in the film, since I have been to many events in the area, being in te DC area myself.

Then the film shifts to 34th and 7th Ave in New York to deal with shoplifting.

Finally, the shortened film showed a prison (I think in upstate New York) with a Bach French Suite playing on a harpsichord, an ironic effect.

What a film!  It makes a good pairing with "Whose Streets?" soon coming from Magnolia Pictures.