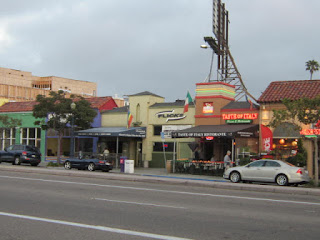 For “La La Land” to win best musical or comedy was entirely expected, but for “Moonlight” to win best dramatic film is quite remarkable: an LGBT film (and African American) film set in a troubled south Florida neighborhood, dealing with gangs and drugs, too,  It reminds me of my visit to Belle Glade in 1986.  I wondered if a film like “Judas Kiss” could ever win such an award, but then it occurred to me, that in films like “Judas Kiss” and “The Dark Place”, the gay characters are too clean-cut and establishment.  Even Shane Lyons fits the stereotypes of conventional attractiveness (even if he evolves into a real life Milo).

I like the way they gave a nod to Canadian actors, like Ryan Gosling.  Include Gregory Smith and Richard Harmon in the mix.

Then there is the issue of Meryl Streep’s speech, about Donald Trump’s propensity to humiliate others.

Well, Trump tweeted back, that he never mocked a disabled reporter (and his opinion that Meryl Streep is overrated), and here is one of his defenders:

I’ve imagined that Meryl Streep could play the high school principal in the backstory sequence (“The Sub”) in my “Epiphany” screenplay based on linking together my three DADT books in a sci-fi setting.

I remember particularly the horrifying backstory scene near the end of Alan Paluka’s 1982 film “Sophie’s Choice” with Streep as Sophie. Roger Ebert had said that this was not just another concentration camp story.