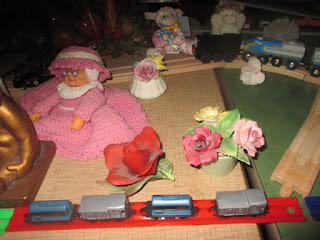 “Guinea Pig: Mermaid in a Manhole” (2002, directed by Hideshi Hino, “Gini piggu: Manhoru no naka no ningyo”, 58 min) is a camp Japanese horror film, that could get revived as a cult or midnight film.

The link to see it free right now is here.  I had some trouble with the video player hanging and stalling a lot.  The subtitles are in French, and the dialogue is very simple to read.  The film is shot in the old 1.37:1 aspect and looks extremely low budget.

The film opens with an image of a “Chuckie” doll in a sewer (remember “Child’s Play” (1984)).  An artist (Shageru Saiki) investigates the manhole and finds a mermaid, an brings her up to his tiny upstairs apartment.  Her body disintegrates quickly with sores and worms.  The artist uses her body fluids as paint, in an exercise that seems to make fun of Oscar Wilde’s “The Picture of Dorian Gray”.  It gets pretty gross, with the vomiting scenes (remember Roman Polanski’s "Carnage" (1/14/2012”), but when she dies, he dismembers the body.  The blood flows through a leak to an apartment below, and a young couple calls the cops.  He winds up in a mental institution, looking like a manhole, as the authorities say she died of cancer. (OK, we have American Carnage, and Japanese Carnage.)


Reid Ewing (a fan of Danganronpa, based on Japanese manga) found this link and shared it on his Twitter feed.  I’d love to see him do more short films (like in the “It’s Free” series) again.  They would fit into a dialogue on open access (which Jack Andraka has been pushing relative to science fair researchers.)  But I suppose we could see a Danganronpa movie some day (there are plenty of such “movies” extracted from the game series on YouTube now). .