"Carousel": Remember the 1956 CinemaScope-55 film if you see the stage musical 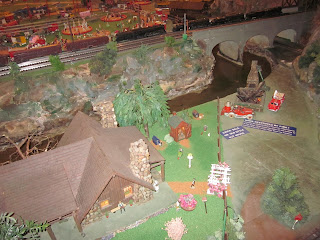 I missed the stage version of the Rodgers and Hammerstein musical “Carousel” at the Arena Stage in Washington recently (it ended Christmas Eve), but I remember the 1956 musical film (directed by Henry King) well.

David Ignatius describes the plot in an op-ed in the Washington Post on p. A19 December 30, “America’s upcoming stress test”, or, online, “Is America at its greatest what Trump has in mind?”   In coastal Maine, a factory worker girl Julie Jordan (Shirley Jones) falls in love with a carnival merry-go-round barker Billy Bigelow (Gordon MacRae). They fall into hard times and Billy dies committing a petty robbery.

I do remember the songs, like “You’re a queer one, Julie Jordan”, “If I loved you”, and (as part of a monument to heterosexuality).  The longest song is probably "Soliloquy", aka “My Boy Bill”, where Billy imagines his future kids.  We all want “My Boy Bill to be as tall and as tough as a tree” (without naming names, I can think of a few people whom I know who fit – you all know who you are if you find this post and know me) and then suddenly asks, what if his child is a “girl”.  We’ve come a long way from that, seeing women just as needing to be protected (too much the mentality in 1956), albeit as future moms, to being in the world on their own (yes, Hillary Clinton).  Another great song is at the end, “You’ll Never Walk Alone”.  And don’t forget, “This was a real nice clambake” – I think of a particular “I’m still young” 29th birthday party in West Hollywood (the Abbey, maybe) with a particular picture on Twitter of a raw shellfish dish.

The show and film open with the “Carousel Waltz”  in D Major, a boisterous and furious (vivace) bit of post-romanticism that turns into a full concert overture that deserves to be played on regular symphony concerts.