Wolfe's collection of short films "Boy Crush" shows what it was like in the mid 2000's; "Out Now" deals with bullying 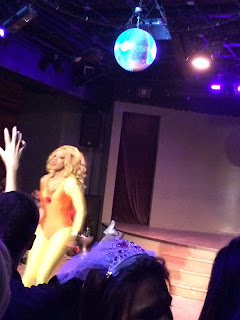 The Wolfe collection “Boy Crush” (2007) comprises seven short films.  The largest, I discovered later, I had already seen in Logo (below), is saved for last.

The second biggest is “Out Now” (20 min), by Sven Metten, is set in a boys school in the Alps (apparently Austria, as the film is in German).  Tom (Dennis Prinz) deals with being bullied while carrying on chats online with other gay guys, just out of his mother’s sights .  The film really has  spectacular winter setting, and some interesting camera work in the disco scene.  But the theme of bullying is choppily covered, even if the boy throws up once when helped up off the field by a gym teacher. There’s one surprise scene at the end at a stag party (behind the disco) where a couple of his macho teammates aren’t as straight as they pretend to be.  One of these is Nikias (Veit Messerschmidt) who had been exposed in the chat room, and indeed looks like a perfect 10 on camera.

Then there is “Night Swimming” (18 min), by Daniel Falcon. A bisexual teen takes a gay friend out into the woods (in upstate New York) for an adventure, after breaking with a girl friend.  The car breaks down, and they become intimate.  There’s even a rogue hunter shooting randomly in the woods, bringing up the idea of pink pistols.  His main catch is some venison that he would gladly share with the boys when they hitch a ride back. But this film does not go into the dark area of some other road short films (as had “Bugcrush”, which could have fit this collection well, but belongs to Strand).

“Running Without Sound” (12 min), by Judd King, presents a deaf California jogger, communicating in sign (a valuable skill for anyone) having a crush on a track team mate.   The film is shot in narrower 1.33:1 aspect.

“The Bridge” (9 min, by Georg Barnakadze) presents a gay couple in Sydney, where one of the men is trying to emigrate into Australia, maybe as a political refugee.  His boyfriend has trouble breaking the bad news after learning it first.  A rewrite of the film might make sense now given the problem of the persecution of gays in Russia or some other countries like Nigeria.  I'm not sure that the famous bridge at Sydney harbor makes for a metaphor.

“Summer” (9 min, by Hong Khaou), set in a forest in Britain, has a gay teen of Chinese ancestry falling for a straight native British boy, who denies he is gay but still accepts the friend as a shipmate. This is no time for sloughing.

Another nice little film is the pseudo-ripoff of “Psycho”, called “Hitchcocked’, from Unicycle, by David M. Young, reviewed here Oct. 13, 2007.

The video also has a mini-short featurette advising gay men to stay away from crystal meth before having sex.