"That's Not Us": Another couples' vacation movie, with all possible combos 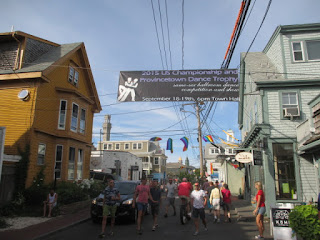 “That’s Not Us” (2015), directed by William Sullivan, written by Derek Dodge, is another variation of a combined couples movie, a format for romantic comedies popular since the 1980s.

This time, the variable is sexual orientation, and the writer wants to prove it doesn’t matter. A young gay male couple, a lesbian couple, and a straight couple spend the weekend together on a beach island. Like a Robert Altman movie, the script moves back and forth between them, weaving the stories.

The gay couple has a one partner having told he got into a chemistry program at grad school, and his lover prodding him to say he wants to go, and then to deal with the lover’s being left alone.  Childish, too much emotion for me.

With the straight couple, the girl teaches the guy how to ride a bike. It’s late September and nobody will see how physically awkward he is, like a “chickenman”. The guy falls and breaks his arm.  I’ve done that.  The lesbians go sailing (and present the most explicit scene in the film).

The script has some cute lines, like “most people leave their phones in their rooms when on vacation”. Sure, like “most people walk in the direction they’re headed” (“Judas Kiss”).
Toward the end there is a plot complication about the validity of their rental.  Was this “Airbnb”? Were the ladies squatters?

I’m not much for staying in one place on vacation, even P-town.  And back in NYC in 1973, the West Side Discussion Group hosted “are gay resorts really gay?”

The official site is here. (Strand). The film has shown at Frameline and Outfest. I watched a complimentary review screener on Vimeo.  The DVD will be available April 19, 2016.  The film does not say where it was filmed.  Is it Fire Island?
Picture: Provincetown, MA, mine, Aug 2015