"People Are the Sky": a North Korean born naturalized US filmmaker tells the history of the hermit kingdom from the people's point of view 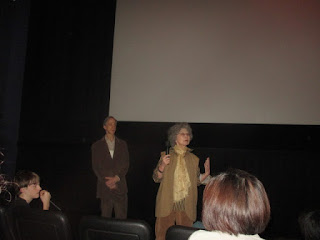 “People Are the Sky” (2015), written and directed by Dai Sil Kim-Gibson, purports to be the first film made inside North Korea by a filmmaker with official permission to film there. The film is part autobiography of the now 75-year-old filmmaker and professor, born in North Korea just before WWII and a naturalized US citizen. It is also a history of partitioned Korea with much more deference than usual to the Communist viewpoint. So this is very different from establishment media news reports and films about the horrors of peasant life in the country.

Kim-Gibson’s village was overrun by allies in 1950, just as her families quarters in Seoul were overrun by the North Koreans. The film shows considerable war footage.  The film maintains also that The US and allies go into Korea to “protect” Japan from the Soviets and Chinese, under a domino theory. Dai then maintains that North Korea grew economically until the 1990s, when the period of the “The Arduous March”, which the country escalated its militarism putatively at the expense of feeding civilians, and began to emphasize a cult-like status for its leaders.

The film also maintains that Americans and allies killed proportionally more civilians than they later would during the Vietnam war.

Toward the middle and end of the film, Dai shows more of what she was allowed to film, around Pyingyang, where the government buildings (some colorful interiors are shown) look up to the people’s apartments, then her own countryside home village, her own family home gone, and with a museum honoring the civilian dead.  She also shows one Christian congregation, despite the many reports of persecution.  At then end of the film, she climbs an ancestral mountain near her home.

The QA was quite lively, with people from the audience questioning whether the guides would have let her see an honest portrayal of the country.  One person in the audience criticized a false analogy between American racism and the treatment of most civilians in the DPRK by its government.
In the end, the director insisted that it was talking to ordinary people that made the film. She admitted that South Korean youth are bigger and stronger than their peers int he DPRK.

The film is shot in digital video, not quite as high-def as one might want, and there is considerable use of still art.

The film played to a sold-out audience at Filmfest DC today at Landmark E Street (although a smaller auditorium) with a long QA of the director.

The showing of the film is now ironic given North Korea's latest "nuclear" threats.  But the film purports to show why North Korea "hates" the US so much.

The closest I could come to an official site was in the “Women Make Movies” catalog.