"Paths of the Soul": pilgrims go on an amazing strenuous journey to Lhasa, Tibet, kowtowing all the way 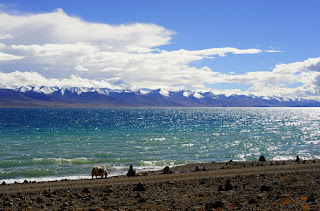 “Paths of the Soul” (2015), by (Chinese film, editing and producing from Beijing, in Tibetan) director Yang Zhang, traces a pilgrimage of a few Tibetan families(inspired by Nyima) to Lhasa over 1200 kilometers, and then beyond into the Himalaya, over ten months. The journey may actually have begun in western China.

When I was growing up in the 1950s, I was used to thinking of Tibet as a separate country (as we were taught then in grade school). But actually, it was taken over by force in 1950 by Communist China and is regarded as an “autonomous region”, essentially a large province of China (more or less analogous to the Northwest Territories or Yukon in Canada, or Alaska and Hawaii before statehood).

China has brutally suppressed Tibetan dissent and desire for independence, and tolerated its Buddhist religion, which is probably an economic asset.

The film is stunning.  It deserves to be presented in Imax 3-D.  It is well shot, with sharp detail and subtle natural earth tones, in standard aspect, but has the look of 70mm film.  It comes as close to giving the filmgoer an experience of visiting another planet on Earth and living with an alien, communitarian culture for two full hours, as is possible in movies.

The families make camp every night and sleep on top of one another, inside makeshift quarters that defy description. But the most amazing part of the experience is the kowtowing, where the pilgrims bow and prostate themselves, using boards under their wrists, and making forward movement that looks like a combination of skateboarding on your arms and military low-crawling. The procession is led by a richshaw driven by a tractor.  When the tractor gets struck by a speeding car maybe 50 miles from Lhasa, the celebrants simply roll it the rest of the way by hand. (Earlier, the tractor loses a screw and throws an oil pan leak, but the film doesn’t explain how it got fixed.  But the towns along the Tibetan road are more modern than one expects, and there is more car and truck traffic than one expects.)  Near one town, by a spectacular mountain lake, farmers plough an overnight spring snow into the ground.  There is a curious image of a ragged rainbow-like flag over the road as they enter a couple towns.  Their vocal prayer chants make for a strange, atonal music.

There is also an amazing sequence where a baby is delivered, on camera, by doctors in a Tibetan clinic.

At the end, an unmarried man, an uncle of many of the children who had raised them (there is a subtle hint he is gay) passes away overnight in the communal tent and is given a grand funeral.

The alien images in the film are too many to count.  In one scene, there are two separate cloud decks against the mountains.  In another, a road has four switchbacks in one camera shot.  A deep canyon is almost like a tunnel, pummeling he parade with a rock slide.

The official site is here (Icarus films, with many production companies from China).

The film showed to a sold out audience at Filmfest DC at Landmark E Street tonight, but in a smaller auditorium.  It probably got a full 5 out of 5 stars from one most tickets (I lost mine).  It was a major selection at TIFF (Toronto).

Wikipedia attribution link for picture of Tibetan lake by Reurinkjan, under CCSA 2.0