"Midnight Special": an "evangelical" man's son may be an alien, and so dad might be also: quite a road trip across the South 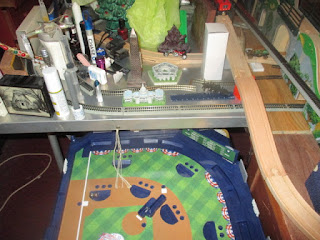 “Midnight Special”, written and directed by Jeff Nichols, aims to become a high profile science fiction film, and there are some big ideas, like finding out that your son may be an “alien” and that even you might be one, too.

The story starts as a father Roy (Michael Shannon), with the help of a cop Lucas (Joel Edgerton) are fleeing a Texas religious cult and an amber alert with Roy’s gifted son Alton (Jaeden Lieberher).  Alton seems to have special powers, which became manifest when his eyes and body light up.
Satellites fall down, fracking earthquakes happen, and even domes appear around an area (borrowed from Stephen King).  But the NSA is all too interested, apparently believing it is on the trail of the first confirmed contact with alien civilization in modern times (Van Daniken notwithstanding).  In the meantime, Roy seeks, unwisely, the help of former cult member Elden (David Jensen).

Adam Driver plays the young analyst Paul Sevier, in one of his best performances.  He’s rather charismatic himself as he establishes a rapport with the boy and others in the movie.  (He seems like someone who could have fit into “Judas Kiss” or “The Dark Place”.)

The evidence of alien or divine intervention mounts, as the movie moves east, eventually winding up in the pine barrens and swamps of the Florida panhandle.

It may be too much of a spoiler to describe everything, but we do get a temporary idea of a what a city in an alien civilization (maybe in a parallel universe, or maybe in a “hollow heaven”) really looks like.  It’s rather interesting, something that belongs in an Orlando theme park.

The film has big studio backing from ("Casablanca") Warner Brothers (and Ratpac), but is in the festival circuit (SXSW( and is being marketed to arthouses as if a “big” art sci-fi film, to deal with issues like religion, heaven, alien civilizations, and relations thereof.  Nichols says he felt inspired to do the film when he became a father, like any parent can be privileged enough to bring up a kid who changes the world.  But parenting always carries “risks”.

The official site is here.  Ars Technica (Annalee Newitz) has a take on the meaning of the film here.

I have witnessed at least one incident in my life where I wonder if the person has “powers”, practices magic, or is an extraterrestrial.  Seriously, I wonder what the law says. Would someone with human DNA or normally indistinguishable from a human but from another planet have full legal rights?  “Smallviile” could raise that question.  We already have a taste of this – dealing with “non-human persons” – orcas, who may deserve full legal rights of personhood.  Just don’t bring this up with Donald Trump (not to mention such a person would probably win his “apprentice” show undetected)
.
I saw the film at Angelika Mosaic in Merrifield, before a half-full late Saturday afternoon audience.

Picture: Crude model of “The City” on a space station (on Titan) in my screenplay “Do Ask, Do Tell: Epiphany”.  Don't confuse the title of this film with the notorious "Midnight Express".