"Demolition": Jake Gyllenhaal looks silly with his OCD self-deprecation as he grieves the loss of his wife 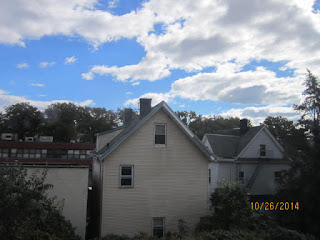 “Demolition” (2015), directed by Jean-Marc Vallee and written by Bryan Sipe, pretty much drew me into a nihilistic rabbit hole today.  To me, the film seemed like politically correct “crybaby” comedy for its own sake, the stuff that meets conventional Hollywood ideas of screenwriting. The tagline is "Life: some disassembly required".

Jake Gyllenhaal once again plays anti-hero (a long way from the nice guy of “Moonlight Mile” or the teen hero of “Donnie Darlo” (remember the rabbits).  He plays investment banker Davis, married to Julia (Heather Lind), working for his father-in-law (Chris Cooper).  In the opening sequence, as the couple crosses one of Manhattan’s many bridges, Julia is pestering him about fixing things around the house, especially the fridge, working with his hands. There is a sudden crash (the other driver’s fault) and he survives without a scratch, but Julia is killed instantly. The rest of the movie is about his grieving process, and he definitely doesn’t want to move on.  One problem is that Julia was pregnant, with a child he later finds out wasn’t his.

In the ICU, he has trouble with a coin-operated vending machine, and starts writing weird letters complaining about their customer service.  In the course of time, he meets and dates a rep Karen (Naomi Watts), and builds a bizarre bond with her son Chris (Judah Lewis), whom I thought was a girl. Chris actually asks Davis if Davis thinks he (Chris) is gay.

But the most disorienting part of the movie is Davis’s compulsive behavior, first taking things apart (proving he can become a handyman), but then looking for opportunities to smash things, including his own glass home.  That reminds me of my visits as a boy to a psychologist, where we smashed toys (I was about 8).

There’s another thing: Jake’s intermittent depilation seems to become more permanent.  In an early scene, he lathers and shaves his stubbly chest on camera, as if his body hair were a superficial and expendable extension of his beard.  Some scenes show the past shaving of his arms and legs for other movie (like “Nightcrawler”). Oh, yes, one of the other minor characters is a competitive swimmer, but the connection is never made. And, remember, maybe this got started when Jake appeared in drag on SNL a few years ago.

I saw the film before a small audience in a small auditorium in the recently renovated Ballston Common Regal cinemas.  But the sound track in the left channel was extremely noisy and distorted by breakup, resembling inner-groove distortion on a bad LP vinyl record. The sound was affected during the preshow, the previews, and the entire feature.  I went downstairs and told management during the previews, but it wasn’t fixed during the showing, even though an employee seemed to be checking the auditorium a couple times.

The music score includes a Chopin nocturne or two, and some Puccini transcribed to piano,

The official site is here (Fox Searchlight). For me, this dramedy wasn’t funny. One star out of five.

Picture: Near White Plains, NY, from the Grand Central commuter line north, my picture,  random scenery along the railroad, Oct. 2014.