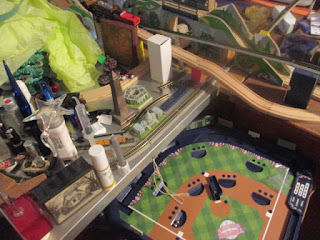 As the movie opens, the world is reeling from alien attacks, that cause a 9/11-like collapse of some office towers in Gotham, with alien spaceships always in the sky. All of this is leads to a battle as to what kind of comic book or even manga superhero the world really needs.

Ben Affleck will play Bruce Wayne, aka Batman, as somewhat mature, beginning to age  out of his playboy image.  His ability to fit into his costume seems to have cost him his chest hair.  Henry Cavil keeps everything on as Superman, and the script does make some references to Smallville.  There’s a touching scene with his adoptive dad (Kevin Costner).  But the funniest character is Lex Luthor, played by a long-haired, fast-talking Jesse Eisenberg.  (Jesse always talks fast, loves cats, and may turn out to be more important as a writer than an actor.)  At one point, he says that knowledge without power doesn’t work out too well.

About three quarters into the film, the long-awaited battle between Batman and Superman happens, and, surprisingly, Batman seems to get the upper hand.  I thought that Superman was supposed to be undestructible  But the ending leaves us expecting a Christ-like resurrection (like yesterday’s movie) before there can be a sequel.

Gotham and Metropolis look like the same city, and the movie gives us no sense of geography, or where anything is. (Really, it's a battle between the Mets and Royals, with plenty of "small ball".)

The music by Hans Zimmer sometimes rises to the occasion, and the soundtrack includes the witty (almost Bizet-like) Waltz II from Shostakovich Jazz Suite #2.

Just imagine this fall's election, if it turns out to be "Donald v. Bernie".  Which one is Batman?

I saw it in the large, #1 downstairs auditorium at Regal Ballston Common Wednesday night, with only five people in the audience including me.  I give it two out of five stars.