"Batkid Begins: The Wish Heard Around the World": A huge "Make a Wish" event in San Francisco 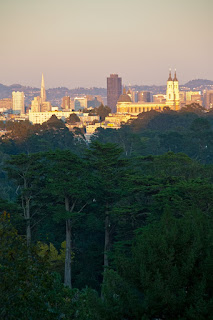 “Batkid Begins: The Wish Heard Around the World” (2015), directed by Dana Nachman and written with Kurt Kuenne, presents the story of a spectacular “make a wish” event (Nov. 15, 2013) in San Francisco, for a 5-year old, Miles Scott.  boy with terminal leukemia.  His wish was to be Batman.

The early part of the film shows the family’s learning the diagnosis in animation, and sets up the idea that “Batkid” can become a comic book character himself. It started with a lump that was first mistaken for an ear infection.

The event drew tremendous public support, to say the least. A journalist penned the story “7000 strangers come together” and had to change the count to 10000.  The campaign had to get professional volunteer help to manage the social media campaign.  The reporter said the story challenged his idea of "objectivity".

On the day of the event, an “attack” on the city was stimulated, with various Batman characters responding.   The event moved to ATT Park, of the San Francisco Giants. Some of the games were held in a kid’s toy replica of the entire stadium where whiffle-ball can be played.

Was this event really all about “self-giving”, or was it a cause to have a big city-wide party, in the late fall (when it is usually still warm in the city), almost comparable in size to gay pride?  This is not the sort of cause I put my own personal emotions into.

The city is shown in blue skies, with major landmarks, like City Hall, that reminds one of other films, as about Harvey Milk.

The film is distributed by Warner Brothers and New Line (official site,  KTF Films ).  WB doesn’t use its separate indie trademarks anymore;  in the past, the film would have been branded as Fine Line Features or possibly Picturehouse.

The film is expensive on Amazon, but can be watched in Instant Play on Netflix.  If you want to see “Batman v. Superman”, see this also.

As a short, Tom Foreman of CNN linked, on Facebook,  to “ARLO World Down Syndrome Day 03_21_16”, here. (by Daniel Sheire).  Once you become a parent (maybe not always by intention), you can face anything.