"A Hologram for the King": Tom Tykwer creates another dream world with political sensitive material (this time Saudi Arabia) 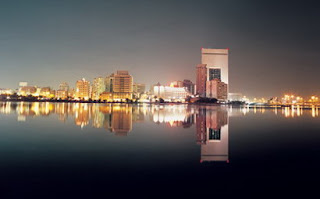 German director (and writer and music composer – call him Renaissance man) Tom Tykwer likes to put disparate concepts together in his films, creating a viewer experience that is almost like a dream.  Indeed “A Hologram for the King”, based on the novel by Dave Eggers, is at one level a satire, but at another plane it gave me the disconcerting feeling that I was sleepwalking (yesterday’s review). As with “Cloud Atlas”, everything is connected, at least in string theory.

Tom Hanks, as Everyman Alan, plays an American businessman whose life portrays everything that is silly about sales culture, right out of “The 100 Mile Rule” (where you must "always be closing").  First, let’s get to what his teleconferencing software would do.  It creates holograms of people to be right there in the room. It’s not just a super Skype. The holograms seem real, rather like out of dreams you want to stay in.  The analogue is teenage Clark Kent, in “Smallville”, whose “speed” lets him move instantaneously from one place to another by changing space around himself (like a man whose body becomes an Albucierre drive). The hologram appears only once, played by Ben Whishaw (somehow I think they could have cast Jack Andraka for this – having powers like this is something “Nano-man” wants to do).

The rest of the film, though, is pure dream stuff.  You get a feel for what is to come from an opening scene on a Saudi airline where Alan watches the men sing religious chants and doesn’t want to join in.   When Alan (remember, the name of the alien in Dan Fry’s “To Men of Earth”) arrives in Saudi Arabia, he stays in a lah-te-dah hotel (in Jeddah) – where you can get away with things, and hires a non-Uber driver Yousef with a clunkler (Alexander Black), whose antics get annoying. He arrives at the proposed seaside business resort and finds his staff working in a black tent, and the King’s arrival uncertain.  Back in the hotel, he notices a lump on his back, tries to cut it out, nearly bleeds out (and vomits all over his bed like a kid), sees a female doctor (Sarita Choudhury) in Saudi Arabia, who generously removes the tumor for free – and then they start an affair.

Along the way, Alan gets to watch the hajj, as a gawker, not a participant.

All of this is hard to take when you know what kind of a country Saudi Arabia really is. (See “Saudi Arabia Uncovered”, PBS Frontline film, TV blog, March 30, 2016).

The film is shot on location largely in Morocco, and Egypt, but also with the hajj scene in Mecca, and it appears that there is a long distant shot of the real Jeddah.

I saw the film before a fair audience Saturday afternoon at Angelika Mosaic.