"Remember": A man with dementia goes on an arranged road trip to avenge the concentration camps 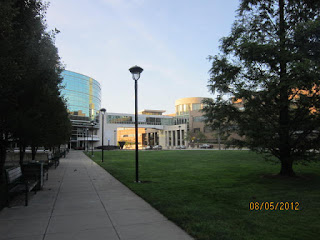 “Remember” (2015), directed by Atom Egoyan, combines eldercare with Holocaust survivorship and vengeance.  It’s a natural enough premise for a film.  My question is whether a man with dementia, Zev Guttman (Christopher Plummer) really could follow the handwritten instructions from fellow Auschwitz survivor Max Rosenbaum (Martin Landau), for the road trip, starting in New York,  dealing with buying a weapon in Cleveland, then using busses, motels, taxis, and Canadian border agents as well as he does.

The aim is to avenge their nemesis at the concentration camp before he can die honorably.  As the film progresses, it gathers steam.  By the time Zev encounters the neo-Nazi cop in Wyoming (the sequence is shot in Alberta, near a shale mine) we’re ready to see someone go down.  And indeed there is a surprise at the end.

Zev has some lingering music talent, playing Moskowski on the piano (I love the B Minor concerto), as well as some Mendelssohn (the slow movement of the first piano concerto) and eventually some Wagner, Tristan, with all the chromaticism transcribed for piano. The setting for the climax at the log estate on Lake Tahoe is indeed spectacular.

Henry Czerny plays the 50-something son, well off, who has still had to put dad in assisted living (where they lock the Alzheimer's unit).


The official site is here  (A24, E-One and Serendipity).

I saw the film at Cinema Arts in Fairfax VA, a personal 9 PM showing, on a day with a lot of bad world news.