"London Has Fallen": a repeat of what seems like an absurd franchise depicting gratuitous terror plots 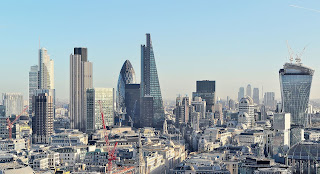 “London Has Fallen”, directed by Iranian Babak Najafi, certainly announces Millennium Pictures’s intention to use actors Aaron Eckhardt (as the president), Gerard Butler (as Secret Service agent Mike Banning) and Morgan Freeman as the Vice President in a formulaic, cash-cow “Has Fallen” trademarked franchise.  In fact, I thought “Fallen” has been the title of a few end-of-times novels.

The starts in an interesting enough manner.  There is a drone strike in Pakistan, setting up the thesis of “cowardly”, computer-game combat from 8000 miles away.  Then, after the credits, Mike Banning is typing his resignation letter on a home computer.

Then the British Prime Minister dies, right after heart surgery.  Soon we learn he was poisoned. An international funeral with all the world’s leaders follows.  A perfect setup for mass assassination.

As with the first film, the level of plotting required with people inside Scotland Yard and Britain’s homeland security is just preposterous -- although the UK and continental Europe face more risk from returning radicals than does the U.S. . (The film makes a point of saying that the City of London has been secured as a fortress.)  At first, the small arms bombings and shootings create a visual spectacle (and a bridge collapses into the Thames). Then a heat-seeking missile strikes down the President’s chopper, and he is kidnapped.  This sets up for, believe it or not, a scene with an intended YouTube beheading.  The good guys arrive just in time. No wonder Donald Trump talks about torture and committing his own war crimes. Alan Aboutboul provides an average performance as the villain Amir Barkawi.

The popular risk of a catastrophic attack, beyond what happened in Paris on 11/13, is really much more likely with true WMD’s, including radiological or EMP (which does not require nuclear detonation). That idea would make for much scarier film, and a much more effective warning.

I saw the film at Angelika Mosaic in Fairfax VA before a small, indifferent Saturday afternoon audience.

The pre-show featured a short film about dating, “Serenade”.  I couldn’t find an exact match online.

Is it Brian and Karl’s film here?