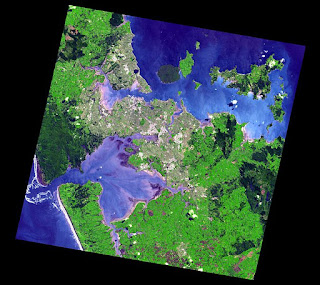 “Kawa” (2010), directed by Katie Wolfe, is a somewhat formulaic drama film about a married gay man dealing with the tensions and expectations of his family.  Set near Auckland, New Zealand, it is based on the novel “Nights in the Gardens of Spain” (an alternated title for the movie, too) by NZ author Witi Ihimaera.  That’s also the name of a somewhat nebulous piece for piano and orchestra by Manuel de Falla, not one of my favorites.

Kawariki (Calvin Tuteao) is a middle-aged business man of Maori (mixed) ancestry, working for his father’s (George Henare) unspecified business, which he is expected to take over when dad retires. Also, as expected, he’s married with kids, with wife Anabelle (Nathalie Boltt) and two appealing kids: a little girl Miranda (as in “The Tempest”, Miarama Jane-Devantier) and potentially gifted teenage son Sebastian (Pana Hema Taylor).

He also lives a secret life, visiting baths and has a (white) boy friend Chris (Dean O’Gorman).  One night, after a disagreement, Chris tracks him down on the beach at the family estate at night, a scene with stunning moonlight beauty. After a fight, they kiss, and Kawa’s mom Grace (Vicky Haughton) is profoundly offended and orders him out of the house.

Recently, his marriage has been failing, partly over lack of passion.  When things come to a head, mother wants to keep the fiction that he had fallen for another woman, because that would not insult the family as much as would his openly being gay. His wife vomits when she is told (I thought of a similar scene in “Making Love” (1982) where the wife handles under a desk and asks about “passion”).  Kawa is quizzed about how he could have brought children into the world living such a subterfuge. But his the family patriarch screams about Kawa’s “selfish choice” and rejection of “what he was born to be.”  Dad is giving away his moral vision: adherence to sexual mores (sex only within one marriage) confers the right an power of the father, through procreation, to determine who his children will be.  That’s hardly a power any couple really has in nature;  what could have prevented the random chance of having a son with a profound disability instead?

When Miranda nearly drowns on the beach in the moonlight and Kawa rescues her, the family starts to heal.

The official site is here  (Wolfe, which releases some meaty LGBT drama films).  The film is rather brief and compact, at 77 minutes.