"Hate Crimes in the Heartland" documents the 1921 Tulsa attack on "Black Wall Street", and then a 2012 hate crime 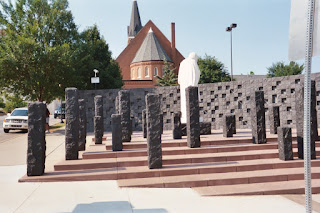 “Hate Crimes in the Heartland” (2015), directed by Rachel Lyon, is an hour-long documentary about the long and short history of racial violence in Tulsa, OK.

The film starts with a history of the May 31, 1921 race riot , which was instigated after the community mistakenly thought a black elevator operator had tried to assault a white woman. Wholesale arson and destruction of the area known as “Black Wall Street” followed, where African-Americans had built an unusually successful but segregated community right after World War I.

The guilty plea was accepted for life without parole, in lieu of the prosecutor’s seeking the death penalty.

The film shows the de facto segregation today, and depicts the lack of economic opportunity in black neighborhoods, which look surprisingly run down (when compared, say, to Dallas, where I lived in the 1980s). Jesse Jackson often speaks.

The film also shows John Hope Franklin Reconciliation Park and tower, in honor of one of Tulsa's famous black citizens.

I think that the late Gode Davis had interviewed some subjects regarding Tulsa for his unfinished film “American Lynching” (2003), as I recall from seeing some footage privately.

The official site is here  (Lioness Media Arts).  The film can be viewed on Netflix instant play or on Amazon.

The script does mention the incident in Rosewood, FL (a lynch mob attack in 1923) and John Singleton's 1997 Warner Brothers film titled such, starring Jon Voigt. .

Picture: Oklahoma City memorial, mine, 2005. I did visit Tulsa and ORU that trip, but didn't save pictures.