"Embrace of the Serpent": two explorers in South America are guided by the same shaman, three decades apart; a "mission" double-connects them 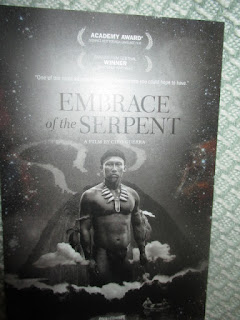 “Embrace of the Serpent” (“El abrazo de la serpiente”, 2015), directed by Ciro Guerra, is a fascinating and surreal historical adventure, nominated for best foreign language film, representing Colombia, and shot in black and white Cinemascope (mostly), near the border with Brazil.

There’s a scene near the end where a jaguar kills a serpent, protecting the humans around, and it struck me that the look of the jungle and particularly the pointed mountains was what a feline would see, with his black and white vision.  This is the natural world.

The story connects two historical explorers with a shaman, over 30 years, as both look for the last of the yakruna, a sacred plant, while reeling from the effects of colonialism and rubber farming.
The first explorer is Theo Koch-Grunberg (Jan Bijvoet), who arrives in 1909.  The shaman Karamakate (Nilbio Torres as young, Antonio Bolivar later, as old) advises him not to fish under the rains come, and not to have sex in most circumstances with locals.  In 1940, Richard Evans Schulte (Brionne Davis) arrives and goes on a similar quest.

What connects the two stories is their experiences at a mission in the jungle.  Theo encounters a Catholic prelate who looks like the old Schulte.  Evans encounters a leader who resembles the young Theo, almost as if to suggest parallel lives or reincarnation. I was wondering if I would see some of the personal intimacy that I talked about with “The Mission in Belize at Double Head Cabbage” (Drama blog, Nov. 4, 2012). Instead, I see religious rituals, self-flagellation, and various masks, and battles over paganism.  Still, the idea of a “mission” connecting the two journeys creates suspense.
Almost at the end, the shaman invokes a colorful psychedelic show in the mind of Evans, with recreation of the big bang, I guess (remember the light show of “2001: A Space Odyssey”).

Evans carries a wind-up record player, where he can play old 78s in the jungle, and the music from Haydn’s “The Creation” is quite effective emotionally (sounding like Beethoven).

This is a fascinating film, bordering on the sci-fi genre.

The official site (Oscilloscope) is here.

I saw this film at Landmark E Street, before a fair weekday audience. 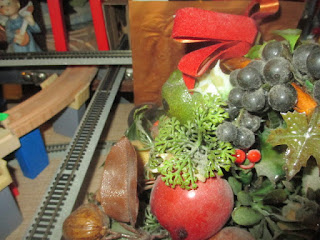