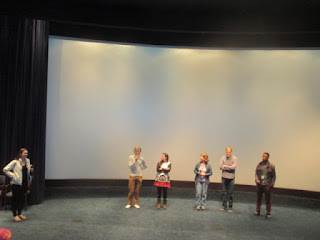 Today I saw the five dramatic short films at the DC Indie film festival.  Most of these had a lot more substance than you normally encounter in shorts. There was a QA afterwards.

The last three films were shown in 35-mm format, in full 2.35 anamorphic wide screen.   The first two were shown as digital projection.  The second of these required vertical cropping to fit the 2.35 format, making the entire image smaller, in a film where detail mattered.

The longest film was “Zero”, 29 minutes, sci-fi, directed by David Victori, with big time executive producers including Ridley Scott (“Scottfree”) and Michael Fassbinder, as well as Google and Youtube, shown fourth in the presentation (full screen). The film is set in modern Los Angeles but was post-processed in Spain, and is in English (as were all films today). The story starts with a widower father Joe (Ryan Eggold) trying to get his emotionally disturbed son Aaron (Felix Avita) to leave for school.  Joe will get fired if he is late for work one more time.  Aaron likes to play with a model train set and some other toys. A babysitter is on the way. And Joe leaves.  When he reaches downtown LA, suddenly the Earth’s gravitational field fails, and objects float as in space (the individual objects don’t lose their own internal structure; this is not “The Big Rip”).  After a minute or so, gravity returns and the objects fall back down.  This will happen two more times in the film as shown now.

The official site is here  and it is a YouTube series.  The film shown had four parts (each around 7 minutes), and it appears that Victori intends to add more “episodes”.  The format resembles “The Power Inside” (TV blog, Sept. 13, 2013).

The boy eventually encounters a vagabond man who caused the auto accident that killed his mother.  A second event occurs, as the media starts covering of what some people believe could be The Rapture (and one thinks of the outstanding HBO series “The Leftovers” (TV blog, Dec. 8, 2015). The third “going up” occurs at the end when dad rescues the boy (after giving CPR), and the suggestion is maybe the boy will be reunited with the mother in some sort of heaven (hollow or not) or afterlife.

Although there was a major feature “Gravity” (Oct. 4, 2013), there are relatively few sci-fi films that really tackle the science.  Morgan Freeman has being trying to make “Rendez-vous with Rama”.

The second longest is “Staccato”, 22 minutes, by Peter McQuinn, shown second (cropped) is an unusual combo: gay period piece, and with a plot detailed enough to need to be an 80-minute feature.
In late 19th Century Ireland, Thomas Croydon (Carey Grainger), around age 21, has inherited an estate (“Falgirth”), with his mother (Marian Rose) concerned about his maturity.  But he is a gifted pianist, and plans a recital of Chopin, John Field and Schubert.  He has hired a gardener Sean (Kevin O’Malley) about his age, much less cultured, but to whom he is sexually attracted.  A secret relationship has ensued.

The gardener gets called away to visit his dying mother.  He has also been sending her money, he thinks, but finds out that the money had been embezzled by another employee at the estate. (I think that idea happens in a George Elliot novel.)  The gardener shows up at the recital.

Here the story telling gets choppy, which would get fixed in a feature film.

The film implies that in the future, the gardener will stab Thomas while mounting him in bed as revenge.  Wow!  But earlier there is an oddity.  A couple scenes imply that the gardener has ample chest hair, but in the first bedroom scene where Thomas undresses his lover, the chest is hairless, implying Thomas had shaved him before.  That would certainly make interesting film.  This movie reminds a little of Jorge Ameer’s work.  Facebook page is here.

The director was at the QA and noted that period pieces have an advantage that the music is all public domain. 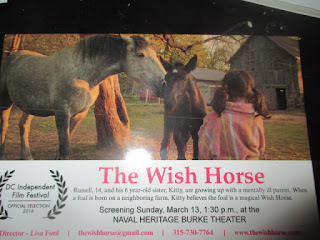 “The Wish Horse” (2014), 19 minutes, directed by Lisa Ford, is set on a farm in the Finger Lakes area of New York State, last presented.  As the movie opens, a single mom Thea (Judith Baribeau) tries to give a birthday party for six year old Kitty (Aliya Iosilevich).  Kitty plays with toys in an odd fashion, putting dolls together to make hybrid creatures. At a neighboring farm, a foal is born, giving some hope. Gradually, we realize that mom is mentally ill and unable to raise the children.  Older brother Russell ({Pierce Rasmussen), about 14, is realizing he will have to “raise” his sister even if he runs away.  Child Protective Services is nowhere to be seen.  Ford was at the QA and seemed to emphasize that the film was about Russell’s realizing his family responsibility without having chosen it.  Facebook site.

“Courting Lewis Baker” (2015), 15 minutes, directed by Richard T. Fields, presented third,  is set in Washington DC, and presents a young man (Tob I Ameru) meeting his estranged father (Caleb Jackson).  He is coming to realize that the absence of his father has crippled his ability to form stable relationships with women beyond one night stands.  The director talked about the emotional damage in the black community due to absent fathers, which fails to provide role models as to how even to build adult relationships that can result in stable marriages.

“Chasing the Sun” (2015, by Jeremy Mackie), 13 minutes), shown first, presents a brother Caleb (Jesse Keeter) driving his impoverished adult sister Celeste (Samara Lerman) to locate the mother, who had abandoned them, in Olympia Washington, on a road trip.  There is an intriguing hippie girl (Madelaine Anderson) speaking for the mom.