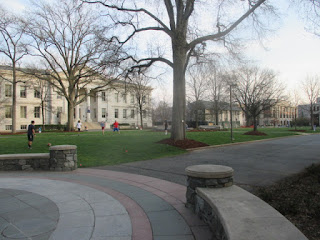 The film concerns the issue of storing nuclear wastes, in a manner that future generations (at least 400)  thousands of years into the future (“deep time”) won’t disturb.  The film often shows animation of how such a toxic area should be marked, with black and white spires and stone canyons.
Much of the film concerns the three nuclear facilities along the Savannah River, in Georgia and South Carolina, one of which produces plutonium.  The biggest focus in the film concerns the WIPP facility near Carlsbad, NM, (over a large salt deposit) as well as the abortive project at Yucca Mountain in Nevada.

There is also a synopsis of the dislocation of the population around Fukushima after the March 2011 tsunami, which is shown.

The film did not go into the issue of policing up nuclear waste overseas, especially former Soviet republics, which can be a source of radioactive material for terrorists.  The relevant film is the 45-minute drama “The Last Best Chance” (2005), produced by Nuclear Threat Institute, with the help of Sam Nunn. Richard Lugar and Tom Brokaw, a fictional scenario with expert commentary and panel discussion (DCD) afterward.  The concern over security of nuclear raw materials was heightened after weaknesses in Belgium (and a possible extortion plot) were reported right after the conventional attacks in Brussels on March 22, Washington Post story by Steve Mufson p. A8 March 26 here.  The New York Times has an even stronger front page  story Saturday by Alissa Rubin and Martin Schreuer.

The official site is here  (Redacted Films and Sundance).

There was a QA with one of the directors.  I asked about Taylor Wilson’s plan to encourage utilities to install “small” fission reactors (Ted talk) to strengthen the power grid from failures or terror attack, and the answer was that newer designs for reactors may indeed produce much less problem with waste than in the past.  Fusion, of course, produces no waste, and the possibility of its use might be less than three decades away.  Wilson discusses the Fukushima disaster here, and the reading material would supplement the film

When I ran a chapter of “Understanding” (Dan Fry's group) in NYC in the 1970s, one of the members ran a caravan around the country opposing all nuclear power.  I saw her focus as one-sided.

The film should not be confused with a horror film of the same name directed by Neil McEnery-West.

The main film was preceded by a short film, sponsored by Subaru, about making all National Parks litter free, with a great grandson of Theodore Roosevelt speaking, and filmed in Yosemite (about 4 minutes).