"Allegiant": in the third "Divergent Series" movie, the kids get initiated into the remaining outside world 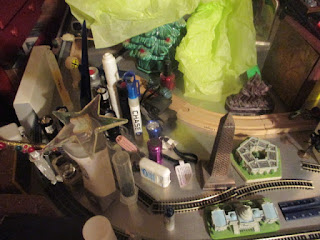 “Allegiant” (2016), the third film of  "The Divergent Series," based on the novel by Veronica Roth and directed by Robert Schwentke, opens up the geography of its world a bit following the first two films, and that was welcome and offered some interesting ideas in an otherwise somewhat tiresome sci-fi concept. There is a tagline “The Truth Lies Beyond”.

This time, the “kids” scale The Wall, the kind that Donald Trump wants to build.  But it may be more like the Berlin Wall, to keep people in Chicago, than to keep immigrants out.  What they find is a devastated world, bleeding with mine waste, looking extraterrestrial.  It’s hard to give a comparison; maybe Titan could look a bit like it.

But the kids get “rescued” and processed in a modern city where they are first “decontaminated”.  Although only Tris (Shailene Woodley) is shown going through all the steps, the implications are onerous for the men:  one of the steps is a total body wax that would remove differential body hair, at least for a while.  There is hardly just material for the hashtag “#ivcritic”; I’m reminded of a scene in “The Andromeda Strain” (1970) where one of the male subjects steps into a photoflash chamber described by physician-author Michael Crichton, and then is subjected to humiliating “body analysis” before being allowed into a top secret chamber.

The young men, most of all boyfriend Four (Theo James), Peter (Miles Teller) and “Erudite” Caleb (Ansel Elgort) more or less recover, and Caleb especially settles in to perfecting some “remote viewing” virtual reality software to track everyone else.  The kids are befriended by the fascist dictator David (Jeff Daniels), and given a trip to the super city “Providence” (not Rhode Island).  I wanted to see more details as to how the city is laid out, what it would be like to live there in luxury.
David rationalizes having implemented the factions in Chicago, and wants to bring them back.  He also has a mumbo-jumbo apology for the genetic engineering of the past that had produced them;  he wanted to restore some sort of genetic equality.  It’s hard to make much more of the political ideology of the film.

In the end, the kids return to save the city.  The most successful kid is probably Peter, who waits to be rescued at the end.  A supporting character is Johnanna, Octavia Spencer, right out of her better known roles on ABC.

I thought about Caleb’s viewing software, compared to what I propose in my screenplay “Do Ask, Do Tell: Epiphany”.  I propose some special glasses (like those in Kathryn Bigelow’s “Strange Days” (1995)) to enable people to read the “backstories” of their peers, and then some special electrodes, only available with surgery, made less intrusive, as an adjunct to “telepathy”.

Summit’s site is here.  The final film is to be called “Ascendant”, released in the summer of 2017 (story ).

I saw the film at the AMC Courthouse, before a fair late Easter Sunday afternoon audience.

The film was shot in Georgia.  A recent anti-gay “religious freedom” bill passed there has raised objections from movie studios.