PBS airs a double sting, by FBI and documentary filmmakers, in Pittsburgh in "(T)error", resulting in wrongful conviction 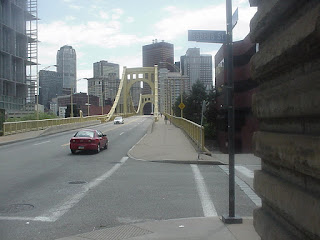 This is truly layered, covert documentary storytelling.  Saeed, a Muslim of African descent with a troubled past, is “hired” by the FBI to work as an informant in Pittsburgh and expose a possible terror cell.  He is not supposed to tell them to do anything (that would be legal entrapment) but he can “goad”.

He is supposed to “bust” Tarik Shah, but is in turn led to a puffy white kid from the UK, Khakifah, deep into religion and behind in child support payments.

In the meantime, the filmmakers were contacted by both Saeed and Khalifah, unbeknownst to each other.  The filmmakers do both sides of the story without the counter-party’s knowledge.  I don’t recall hearing about this kind of setup in the movies before.

The FBI arrests both after indictments, and for Khalifah the grounds seem to be flimsy (with no evidence of terror connections), Khaifah is interviewed by a civil liberties attorney.  But in the end, he is convicted for a weapons charge to eight years, with sentence augmented due to an earlier conviction. The weapons charge was proven by a Facebook post already six years old.

But there is another wrinkle, as Klaifah also has posted on social media he believes he is being framed. There is a little subplot where he apparently blocks Saeed – I think on Instagram.  If the film comes out soon on a DVD, the DVD should include a featurette explaining this.  “Blocking” works differently on various platforms and is always not particularly effective (Vox and “The Verge” notwithstanding for advocating the measure).  I was blocked by someone on Twitter a couple months back in circumstances that seem bizarre, to me at least. Art follows life, I guess.

The public is fortunate to see this important 84-minute film “free” on PBS.  It could well have been picked up by HBO, or held first for the festival circuit (especially AFI Docs).  I think it ought to have a theatrical release with Landmark (maybe the West End in DC) and Magnolia Pictures, so that it could get into next year’s Oscars for documentary.  PBS could lose the banners on the bottom and let the film play without interference. It does appear that the film was available in early 2015, so it ought to have been in the 2015 contest, really.

Official Facebook page is here.  To decipher the title, spell "Terror" as "T" and "Error".

The directors’ review is here.  The filmmakers’ own websites don’t seem to resolve yet. One could compare the directoral style to the work of Andrew Jenks (Jan. 22), who likes to go undercover.