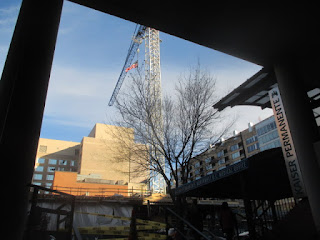 The 2016 Oscar nominations for best documentary short all deal with brutal problems, and all (except maybe the first one below) challenge a lot of us as to our own karma.

The most visible film is probably “Claude Lanzmann: Spectres of the Shoah”, now from HBO, 40 minutes, by Adam Benzine. The filmmaker interviews Lanzmann, now 90, who speaks in French, about the filming of the 10-hour film “Shoah” about the Holocaust, between 1973 and 1985.  Lanzmann talks about the subterfuge, wearing a wire to talk to former Nazi officers, with one narrow escape, and about his near drowning one time in the Mediterranean Sea after filming “Israel: Why?”  The documentary includes a lot of material from the Holocaust Museum in Washington DC.    I do recall the airing of “Shoah” in episodes on HBO in the mid 1990s when I was living in a Fairfax County highrise and working on my own first book (“War and Remembrance” also aired then).  I discussed my own visit to Auschwitz in a review of “Son of Saul” here Jan. 17.

“A Girl in the River: The Price of Forgiveness” (Pakistan) also 40 minutes, from Sharmeen Obaid-Chinoy, examines the problem of honor killings, from the viewpoint of a one of the victims, a young woman who has recovered well from being shot in the jaw, with obvious scars.  Her voice sounds like that of Malala Yousafzai (Oct. 9, 2015). Her father and uncle are now in jail for shooting her and dumping her in a river, and she is presented with the “opportunity” to “forgive” them.  Her former lawyer explains the shortcomings if the Pakastani criminal justice system, that does not punish honor crimes reliably to provide a deterrent.  Her newer lawyer, younger and more religious, won’t talk to her  She is under considerable practical pressure to “forgive” even though she says in the film that in her heart she does not.  It seems that men in rural fundamentalist Islamic societies tie their own sexual function to the idea that their wives are “pure” (indeed, “Pakistan” means “the Land of the Pure”).  The film shows street scenes in LaHore and the rather drab look of much of its residential area, from above.

“Chau, Beyond the Lines” (Vietnam, 34 minutes, also called “War Within the Walls”), by Courtney Marsh, tells the story of a teenager in Ho Chi Minh City (Hanoi), with limbs seriously deformed by the prenatal effects of Agent Orange left by America during Vietnam War defoliation. Chau is one of many kids (some appear “mixed”) presented in the film, institutionalized, in settings now modernized.  He desires to become an artist and self-supporting, and overcomes self-doubt during the film.  In the end, there is a happy ending, sort of, as he can paint with his feet, and get reasonable prices for his work.  But what kind of help do all the other kids need?  I don’t recall hearing much about this problem now from major charities, given so many other issues in the world.  But this is one that the US (and therefore Americans) have some responsibility for

The film will come from “Seventh Art Releasing”.  I think this is the best of the set.

“Last Day of Freedom” (32 minutes), directed by Dee Hibert-Jones and Nomi Talisman, is mostly in Spartan, woodcut-like, black and white animation, not really that detailed, but it tells a chilling story.  It is narrated by Bill Babbitt, who describes how his younger brother Manny sunk into mental illness, committed a murder, and was executed in 1999 after seventeen years on death row in California. Manny (born in 1950) sustained serious brain injuries and learning disabilities after a car accident at age 12. Somehow, he was accepted into the Marine Corps and did two tours in Vietnam, sustaining more mental and physical trauma.  Mental illness has him living in the streets, when his brother takes him in.  But one night, after a bizarre sequence of events, he kills an elderly person.  Bill turns him in, not realizing the worst will happen.

“Body Team 12” (13 minutes), by David Darg, presents the work of a Red Cross team disposing of bodies of people in Liberia who have passed away from Ebola.  The families are denied the ability to give then normal funerals, and people are told to stay in their homes.  The worker says that the teams definitely need women as team members.  At the end, a worker shows just how much gear she has to wear. The squalor of Monrovia shantytowns certainly shows.

I saw the program at Landmark West End in Washington DC early Saturday afternoon.  The auditorium was about half sold.  Landmark presented all films in one seating (163 minutes), but the Program A comprises the first three films, and B, the last two.