"Coherence": an extemporaneous sci-fi movie about doppelgangers showing up at a dinner party after a comet passes. 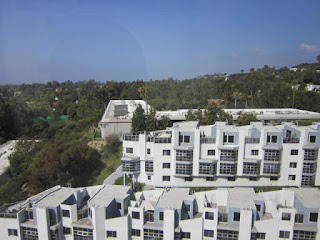 “Coherence” (2013, directed by James Ward Byrkid, written with Alex Manuglan)  is somewhat a game-board party-game science fiction movie, made on a shoe-string.

The premise is that a bunch of LA yuppies are at a dinner party on the night that a comet is supposed to pass close to Earth. Weird stuff happens:  a cell phone splits, then the Internet goes out, then all the power, but the lights are on a few doors down.  Think of “Melancholia”.  I don't think a comet can cause an electromagnetic pulse (EMP) effect.  The script does mention the Tunguska explosion over Siberia in 1908, and a bizarre comet event in Finland in 1923.

When some members of the party go to the house to investigate, all bets are off.  There is talk of quantum incoherence, and then people seem to find their doubles from alternate realities.  And people (especially women) may not want their doppelgangers to survive them. This comes close to the body-snatcher genre.

An element of the story is a box (like in a Richard Kelly movie), with pictures of all the people inside, each with a number.  And then there are hard-copy books with arcane information (almost with the flavor of my own DADT series).

The film was shot by an ensemble crew without a shooting script.  It seems to have been somewhat ad-libbed (like “Irreversible”, Sept. 17).  The film is very “talky”, as are most “party” mystery movies.

The cast includes Emily Baldoni, Maury Sterling, Nicholas Brendon, Loreen Scarfia, Elizabeth Gracen, Hugo Armstrong, and Lauren Maher.  But this is the sort of material that could have appealed to actors and artists like Jesse Eisenberg and Reid Ewing (but then add some scarce Schrodinger’s cats and dogs).

The official site is here (Oscilloscope).

The character of the film resembles that of “Primer” (2004), a low-budget sci-fi film about time travel by Shane Carruth, set in Dallas.

The “Behind the Scenes” featurette is by Steve Graham.