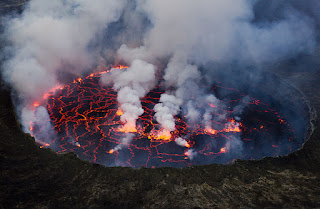 “Virunga” (2014, 100 minutes), directed by Orlando Von Einsiedel and with Leonardo Di Caprio as an executive producer, is a sweeping documentary about both animal conservation but also about sweeping history of post-colonial Africa, specifically the Congo, around Virunga National Park, on the border with Uganda and Rwanda.

The film traces the history of the Congo back to 1885, with some black and white footage, and covers the problems of colonialism (and attendant racism) that resemble one of Anthony Bourdain’s “Parts Unknown” episodes, on the Congo (TV blog, June 10, 2013). The film then shifts gears and covers the care of mountain gorillas in the part, especially by two rangers (Emmanuel de Merode and Rodrigue Muraguka Katembo) in the park, which gets threatened by a British oil company (SOCO)  and then by a civil war (against the government and UN) instigated by a rebel group called M23.

One of the rangers would be shot (but survive), possibly by poachers, as the end credits say. The film also has a disclaimer by SOCO of illegal behavior in the park.

The film has repeated stunning scenery of the park, especially of the volcano (the inside is shown) and of various lakes and forests, with many other animals (like the hippopotamus).  It could use projection on a big screen, but is mainly available online through Netflix (which distributes it).

The official site is here  (Netflix and Grain Media) and is a 2014 Bafta nominee for best documentary.

There is also a short, “Virunga: Gorillas in Peril” (28 minutes), narrated by Soledad O’Brien, which summarizes the film.