"The Propaganda Game" may give the most colorful look of North Korea ever, with a candid assessment of its communist authoritarian culture 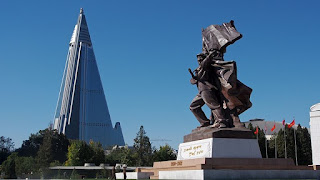 “The Propaganda Game” (also called “The Korean Dream”, 2015), by Spanish filmmaker Alvaro Longoria, provides one of the most vivid and visual journeys of North Korea (the DPRK) filmed.  Of course, it must have been staged by the hermit kingdom’s government.

Alvaro is escorted by Alejandro Cao de Benos, the only western foreigner to work for the DPRK.  While de Benos is personally converted to the hyper authoritarian (and mystical) version of Communism, he admits that in the Soviet Union and China, communism fell to the aides of the leadership.

De Benos seems to believe that this cultist form of hyper-Maoism is as defendable morally as any system.  There are no crimes against individuals, only against “the people”.  It is simply the result of a different way of thinking about what society should be. He has no compunction about the trampling of individual rights in favor of some common vision.

The government ranks citizens by “loyalty” and gives the most loyal the apartments and food and some luxury goods, but no freedom. Everything is “free”.  The camera constantly finds space-age elliptical (“lipstick”) apartment buildings (in Pyongyang) and colorful festivals and spacious museums, and sometimes western sounding symphonic music.

The film also maintains there is no real black market in the countryside, even though people would seem to need it to survive.

The film does cover the DPRK’s sabotage of the release of Sony’s satirical film “The Interview” (Dec. 27, 2014).

China is double-faced on North Korea, which does seem like a buffer to keep US troops away from its border.

The film played at the San Sebastian film festival, and John Hopewell interviews the filmmaker in Variety. The film is distributed by E-One and Memento films (New Market?) and produced by Morena.