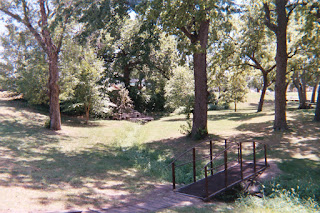 “The Good Lie” (2014, directed by Phillippe Falardeau and written by Margaret Nagle) used a double metaphor for its title.  There is a classroom scene, where the Sudanese refugees are in an English class and one of them tells the appropriate story from “Huckleberry Finn”. There is another one near the end of the film, where Mamere (Arnold Oceng), having returned to Kenya, gives Theo (Femi Oguns) his passport (and his identity) so that Theo can have the chance to live in America, while Mamere stays in Africa and works in a clinic, which he loves.

The film, released commercially in October 2014, now seems particular poignant and relevant given the debate over refugees. Later in the film, the script makes a lot of how 9/11 made the US much touchier in dealing with refugees, much as the debate has intensified because of ISIS and the Paris and San Bernadino attacks.

The back story starts years before, with the second Sudanese civil war.  Some young adults and kids escape, and walk 700 miles to a refugee camp in Ethiopia, after families are massacred.  Years later, four siblings win a “lottery” to emigrate to the United States.  Abital is taken by a host family in Boston, and the three brothers are settled in Kansas City, where they are placed in an apartment.  Volunteers and employees from a faith-based agency help the refugees, most notably Carrie Davis (Reese Witherspoon) who has to be aggressive in going to bat for them.

Mamere and his brothers have difficulty accepting western individualism and bureaucratic selfishness (like grocery stores where they work throwing away expired food, that could be given away).  The family has never had the benefit of a stable commercial infrastructure that makes individualism possible (we take it for granted.)  The brothers have grown up with a very collective and sharing idea of practicing Christianity. Having once said that white people are born without skin, now the kids ask Carrie why she doesn’t have a husband so she will have kids who take care of her.  She answers that she takes care of herself.
Later there is a Christmas party for the “Lost Boys” before Mamere’s return.


The film was shot in Georgia and South Africa.

This is the sort of film that a high school social studies teacher could show in class, along with a video worksheet to capture plot and character details, especially of the beginning and end of the movie.

The film follows on earlier small works, like “The Boys of Baraka” and “Lost Boys of Sudan” (two films,, including “God Grew Tired of Us”), “Darfur Now” and “On Our Watch”.