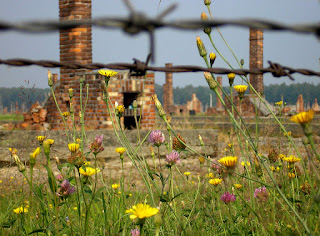 “Son of Saul” (“Saul fia”, 2015) by Hungarian director Laszlo Nemes (co-written with Clara Royer) tells a myopic story of life in the Auschwitz concentration camp in the last days of World War II.
The film is shot in the older 1:37:1 aspect ratio, to give it the look of an older movie, although in full color with Dolby Digital. 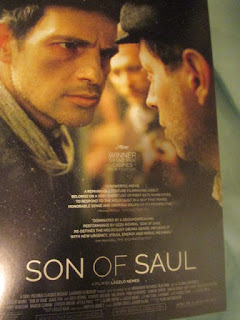 The story concerns prisoner Saul Auslander (Geza Rohrig), a member of one of the Jewish Sonderkommando  work units, assigned to dispose of bodies and process them into the crematoriums.  Most members found out they would be put to death themselves after a few months.
New prisoners are sent to showers, and told they will be fed soup and given work as crastmen when they return.  We hear their cries as they are gassed.
One day, a boy seems to survive, and the “doctors” have to strangle him, and then perform an autopsy.  Saul thinks the boy may be his son, whom he hasn’t seen since capture.  He fights to have a proper burial of his son as a form of personal redemption. He even attempts to enlist a rabbi (Jerzy Walczak) to help him.
In the course of the film, there is a rebellion and an attempt to destroy one of the crematoriums.  Toward the end, some of the prisoners, crossing a dangerous stream, may be able to escape (to Krakow) and get arms in the woods, when another boy appears.
The film puts into the world of regimentation, and curiously reminded me of the shock of Army Basic in 1968, when one’s own immediate short-term comfort becomes a preoccupation.
It does not have the epic quality of, say, Steven Spielberg’s mostly black-an-white “Schindler’s List” (1993).  But it was nominated for an Oscar for Best Foreign Language Film.
The official site is here (Sony Pictures Classics).
I saw the film before a moderate late Saturday night audience at Landmark E Street in Washington DC. It did not sell out.
The opening chapter of my novel manuscript “Angel’s Brother” has two men meeting at the modern day memorial site at Auschwitz-Birkenau, but the novel does not return there.  I visited it  in May 1999, and had a one-day taxi from Krakow, having arrived on a train East from Berlin.