"Youth": Michael Caine, Harvey Keitel, Paul Dano and even Jane Fonda in an otherworldly masterpiece set at a spa in Switzerland

“Youth” (2015, directed by Paolo Sorrentino, gives us visually stunning filmmaking, mostly at a mountain spa in Switzerland, and some ideas about the moral aesthetics of film and music. If it didn’t feature the a-list veteran US-UK cast, it probably would be in Italian and be a more conventional member of the arthouse circuit.  It also borrows some directorial ideas from sources like David Lynch and Terry Gilliam.  It borders on sci-fi, and embraces tragedy at the end.

Michael Caine leads the cast as retired composer and conductor Fred Ballinger, who has really “retired” and doesn’t want to keep working on music.  We wonder why he is so apathetic about living even as he is pampered.  His counterpart is screenwriter and director Mick Boyle (Harvey Keitel), who wants to pimp a new film (substance rather unknown) even as he is confronted by the idea that he last few efforts were bad (especially by actress Brenda, played by Jane Fonda).  A positive sidekick is a young actor Jimmy Tree, played by Paul Dano, who has trimmed back down from “Love and Mercy” and, in one hot tub scene, reveals his perfect, hairless chest.

There are other odd characters, like a fat man with a tattoo of Karl Marx, and a caricature of Adolf Hitler, who has dining room tables to himself.  (I thought of the “Budapest” hotel.)

The “story” gets moving when and emissary (Alex Macqueen) for Queen Elizabeth and Prince Philip arrive to ask him to conduct one last concert with his own song cycle of “Simple Songs”.  At first he refuses, as he says he wrote the first song for his wife, who left him twenty years ago.  (We learn sadly how she left him.) He doesn’t not seek fame or renown now, since his wife has lost her personhood. 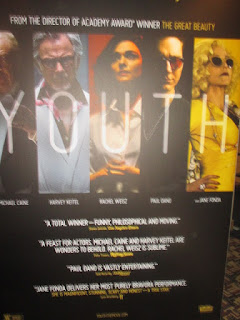 Along the way, the film offers us tremendous delights based on physics, like when the fat man plays foot catch with himself (the physics of a tennis ball rising and falling makes a spectacle), or later when a woman blows a tremendous soap bubble that looks like the Orion Nebula.  The mountain scenery (including a scene from a gondola) is sharply photographed, with no loss of detail with varying depths, and taking advantage of the full anamorphic format.

The script has some great analogies and lines.  At one point, Mick says that everyone is either “beautiful, ugly or just cute”.  Mick also says that when you are young, objects in the world look big, and as you get old, they recede.  The film uses a telescope to make the point visually.

At the end, we are treated to a performance of at least one of the “simple songs”, for soprano, solo violin and chamber orchestra.  It is in B Major (according to my Casio), and resembles one of Richard Strauss’s Four Last Songs.  Mahler (who dedicated some of his songs to Alma, who was also a composer, and deceased child) comes to mind. But he music is original, composed by David Lang.  As I recall there are lyrics about “a simple song” in Leonard Bernstein’s “Mass” and maybe in Benjamin Britten’s “Ceremony of Carols”.  A coworker in Dallas back in the 1980s was a big fan of Mahler and Schubert songs with piano, but not of the big symphonies. The movie also refers to Stravinsky.

The official site is here  (Fox Seachlight).  I saw the film before a fair weekday audience at Landmark E Street in downtown Washington.  It isn’t on many screens.