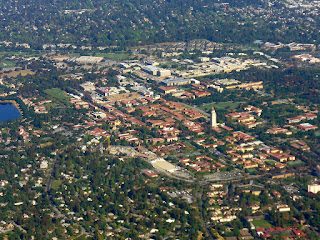 “The Stanford Prison Experiment” (2015), directed by Kyle Patrick Alvarez, is a dramatization of the real 1971 SPE event.   A psychology professor, Philip Zimbaro (Billy Crudup) hired 24 out of 75 candidate male college students, and divided them into prisoners and guards (nine each, with three alternates) so see how young men behave when given and subjected to military-style authority. A “prison” was set up on Jordan Hall at Stanford.

The New Yorker has an article by Maria Konnikova, June 12, 2015, "The Real Lesson of the Stanford Prison Experiment".

The very first image in the film is that of a typewriter roll, and soon Zimbaro and his staff are interviewing the candidates. He asks questions like, “Have you ever given in to an aggressive urge or an impulse?” (a “compulsion”).  Kids, offered $15 a day for two weeks, are asked if they would rather be guards are prisoners.  One answers that being a guard would be more work, and that everybody hates guards.

Zimbarro watches the kids on closed-circuit TV with 1970s technology, and half admits the interest of the US military in the experiment.  The guards quickly make the prisoners wear “dresses”, although they don’t go beyond that.  But the psychologists say that the guards are trying to “strip them of their individuality”, “make them more uniform”, and (most controversial and counter-military) “feminize them” (as if out of Rosenfels).  The behavior parallels military basic training.  The men have to make their beds using hospital corners, undergo typical military-like harassment, and address their "superiors" as "Mr. Corrections Officer" as a parallel to "Drill Sergeant".  (In Basic in 1968, we had to address NCO's as "Sir" despite the fact that in the military as a whole one does not.)

But it only takes two days for the experiment to unravel and for men to have to leave.  The whole experiment lasted six days.

The film has an epilogue in which a few participants (played by the same actors) admit how the experiment taught them to understand darker impulses and vulnerabilities within themselves.
The film itself is rather tedious (running over two hours) and could have been a stage play. The scenery is monotonous (a problem with most “prison” movies) and the wide anamorphic ratio was used to get more men into shots at the same time. That somewhat dilutes the ability to show the effects on individual men with closeups (except for Ezra Miller’s character).

Like many projects, this film took over ten years to get made.

The official site is here  The film played at Sundance in 2015.

The film showed at Landmark E Street in Washington last summer, and I missed it, watching the Netflix DVD.  There is a “making of” featurette, and also a brief short on the psychology of the experiment.

The BBC also has a 30-minute documentary on the experiment on YouTube (above).

Wikipedia attribution for source: Stanford Campus Aerial Photo" by Jrissman - Own work. Licensed under CC BY 3.0 via Commons.