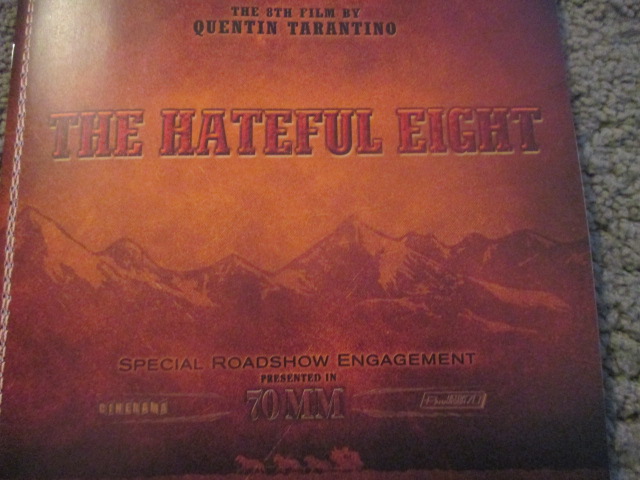 “The Hateful Eight” (aka "The H8ful Eight") needs to be seen in its Roadshow 70mm celluloid format, in a properly equipped theater, if it is seen at all this holiday season.  That appears available only for one week in most locations. Of course, the DVD will offer a director’s cut later.

The film is the Eight Film by Quentin Tarantino, that is, like a Symphony #8. The orchestra music score by Ennio Morricone comprises a full symphonic suite, with the roadshow starting with a lugubrious monothematic “overture”. There is a “slow movement” of brass, and a fugal “scherzo” that plays twice in violent scene ending on one large dissonance.

The Roadshow, arranged by the distributor The Weinstein Company, includes a 12-minute intermission and no previews (because the special projectors have to be used). IMDB says the Roadshow runs 187 minutes, but it appeared to end at 176 minutes when I saw it at Tysons AMC at 7 PM before a nearly sold-out audience.  The format is similar to another film “Grindhouse”  from TWC and Dimension Films (April 7. 2007).  A booklet is given out with the performances.

The opening credits also mention Cinerama (with the trademark still in effect) as well as Ultra Panavision Super 70. Similar formats in the past include Todd-AO (which the Heights Theater in Columbia Heights MN, north of Minneapolis, offered in a special showing of "Oklahoma" for IFPMSP back in 2000.  Most theaters have to do some additional vertical cropping to accommodate the 2.76:1 aspect.

The plot seems rather invented as a take-off on spaghetti westerns. Shortly after the Civil War, bounty hunter John Ruth (Kurt Russell) is delivering prisoner Daisy Domergue (Jennifer Jason Leigh) to Red Rock, WY to be hanged when caught in a blizzard. Major Marquis Warren (Samuel L. Jackson) appears on the trail and “invites himself” as another passenger, when they take shelter at “Minnie’s Haberdashery”, joined by Sheriff Goggins (Walton Goggins), and find a cast of hostile characters, including former confederate general Smithers (Bruce Dern).

The screenplay is divided into five parts, with part 4 (right after the intermission) a backstory of what had happened at the shelter that morning. The film is loaded with gratuitous violence, with body parts (including things that really matter) shot off and “rolling”, something that Joe Bob Briggs would have said “check it out” about back in the 1980s.  There is a poisoning with some projectile vomiting of blood.  It also offers a chess game (and I don’t think chess theory was very advanced in the 1870s); in some scenes, a candle stood at the middle of the board, preventing pieces and pawns from occupying central squares. There is a another crude backstory before the intermission where Major Warren shows his willingness to exploit homosexuality of a “victim”.  The film is rated “R” but gets close to NC-17, and frankly is patently adult.

Here is the Roadshow site for the film from The Weinstein Company. The outdoor winter photography, actually around Telluride CO, is stunning, but much of the film is indoors, where it is not as important (although the haberdashery itself is rather interesting with all its detail until it gets shot up).