"Concussion": a determined doctor from Nigeria takes on the NFL establishment 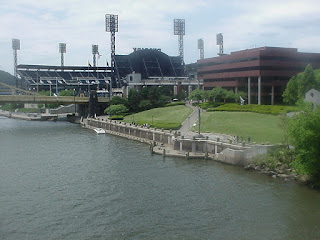 “Concussion”, as the title suggests, is a docudrama about the exposure of the previously hidden (in plain sight) risk to football players from repeated concussion injuries.  It is directed by Peter Landesman, who also adapted the screenplay.

The source of the film is the GQ article from September 14,2009, “Bennet Omalu: Concussions and the NFL: How One Doctor Changed Football Forever” (or shortened to “Game Brain”), by Jeanne Marie Laskas, photos by Nick Veasay.   That article became a book described on the author’s website.

The medical facts are that the human brain (compared to that of many other animals) has no natural shock absorbers and was not designed for repeated concussive hits greater than 60G.  The clinical syndrome is chronic trauma encephalopathy (CTE).  It doesn’t show up in normal cat scans or MIR’s (whereas strokes do), but can be detected from brain tissue at autopsy.  The symptoms are gradual dementia and depression.  The end credits say that 28% of all NFL players have shown some evidence.

The difficulty of seeing this in normal medical examination has allowed the problem to stay undercover for decades.  In the movie, Dr. Omalu (Will Smith), from Nigeria, establishing his reputation in an initial courtroom scene, takes his job as a coroner in Pittsburgh more seriously than most.  He delves into the autopsy of an ex-football player who had become homeless before tasing himself to death.  His boss (Albert Brooks) first makes him to this at his own expense.  In the meantime, Omalu’s parish has arranged for him to house a “refugee” from Kenya, Prema (Gugu Mbatha-Raw), with whom he will gradually fall in love.  Omalu learns of other cases around Pittsburgh, and attracts the attention of another sympathetic doctor Julian Bailes (Alec Baldwin).  He publishes his findings in an established medical journal, and soon the NFL is on the warpath with him.
The NFL owns Sunday, having taken it from the churches, he is told. Soon he gets the threatening calls, and the fibbies prosecute his boss.  That takes us halfway through the movie, but there is a lot more, and it gets personal.

The film sometimes compares the concussion “coverup” to that of the tobacco industry a couple decades before.  Is this a David-vs-Goliath story about seeking the truth, a determination deep within a man’s character?  Or is there some more unusual life narrative?

The official site is here.  Sony and Columbia Pictures are distributing this picture instead of Warner Brothers, which is the usual distributor for films produced by Village Roadshow.  Scott-Free (Ridley Scott) is also involved in production.

I remember my parents taking me to play football when I was about 9, just once.  Never again.  In gym class, it was touch football.  Malcolm Gladwell had proposed that being a college football fan is morally problematic (even for the Fighting Irish?), as I covered on the Issues blog July 21, 2013.

The NFL is already enforcing much longer wait times before players with concussive hits can return to the field (as with the Washington Redskins's quarterback "RG III").

There are other examples of where sources of "entertainment" or consumptive satisfaction involve sacrifices by others.  People who play in symphony orchestras sometimes have hearing loss.

And for all the public support for football, both in college and pro, where it is such big business (look at what happened to Penn State) people do make deprecating remarks. Back in the early 1980s in Dallas, a coworker said, "well, pro-football is proving my "bl..." are better than yours", and obvious exploitation of past slavery.

There is a review of the PBS documentary, "League of Denial: the NFL's Concussion Crisis" on my TV blog Oct. 14, 2014; that film was recently updated.

I saw the film Christmas night at the Regal Ballston Common.  It was downstairs in a small auditorium; upstairs has been renovated, and downstairs will follow soon.  The crowd was surprisingly light.

The closest I can come with my own photos is the Pittsburgh Pirates baseball stadium (2007) above.  Wikipedia shows Heinz Field.

This film should not be confused with Stacie Passon's film of the same name in 2013. 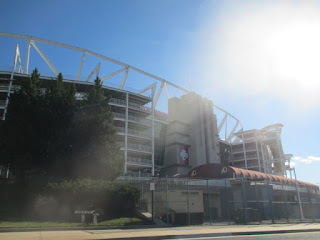 See the Washington Post Editorial: Football must change. Note the comment, that football was developed to give young men who escaped the Civil War a way to show their physical bravery.  That idea had even affected my own upbringing.

Omalu is reported as saying it is likely that O. J. Simpson has degenerative brain disease from concucssions, Atlantic story by AdamChandler here.