"The 33": Mine survival disaster drama in Chile in 2010, overshadowed by spectacular Atacama scenery outside 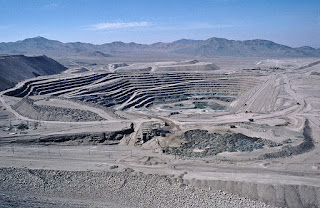 "The 33: The World Was Watching" (or "Los 33") is a survival drama, directed by Patricia Riggen, about the miners trapped for over 60 days in 2010 in a mine in the Atacama Desert in northern Chile.
The narrative is relatively simple.  At first, the government is unwilling to get involved, and the mining company seems willing to walk away from its obligations.  In fact, the film says at the end that the miners were never given special compensation.  A kind-hearted mining official (Rodrigo Santaro) convinces everyone to try and when the first drilling attempt fails he convinces his boss (Antonio Banderas) to “aim to miss”.  At about 15 days, the drill has broken through and can send supplies down to miners.  But it takes three countries and almost 50 more days to build a shaft and elevator that can bring the miners out. The film generates some real suspense toward the end, as the first miner (a new dad) comes up.

The music score was composed by the late James Horner, and is not particularly effective (although there is a scene quoting Bellini).  The film shows some incidents among the miners, but does not generate the tension and interest that larger films (“Titanic”) can.  Some of the problem comes from filming widescreen in a confined space (as with the beginning of “Room”, Nov. 3).  The film also included news clips from Brian Williams and Anderson Cooper.

The “indoor” scenes seem to have been filmed inside salt mines in Nemocon, Colombia, but the aerial shots, especially at the opening, show stunning vistas of the Atacama (and around Copiapo), one of the driest areas on earth.

Wikipedia attribution link for photo of mine in Atacama by Tennen-Gas, under Creative Commons 3.0 Share-Alike.

I labeled the film under "coal mine issues" available on my blog, but I believe this was actually a copper mine. We can ponder the moral legitimacy of depending on the labor of people who work this way. 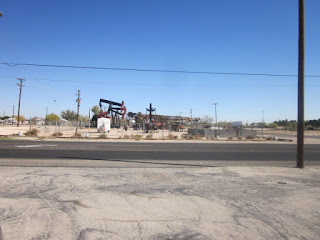 The film reminds me of a 1989 TV film "Everybody’s Baby: The Rescue of Jessica McClure", about saving an infant who had fallen into an oil well shaft in Midland, TX in 1987.  I was on vacation in Utah and watched some of the rescue on television in a motel room. The film showed the new technology of waterjet cutting.  There is a scene where the rescuers have to accept the idea of injuring her more (which they can fix surgically) to get her out at all.