"Room": child raised in confinement by a kidnapped mother, then sees his world open up 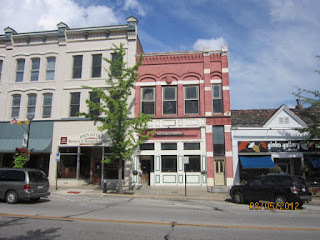 “Room” (2015), directed by Lenny Abrahamson (DGC) and based on the novel by Emma Donoghue, transfers to screen a story told from the eyes of a little boy Jack (Jacob Tremblay) raised in the confied space of a garden shack room by a single mom (Brie Larson), whom we learn gradually (from sounded effects at first) had been kidnapped and impregnated by a horrible man Old Nick (Sean Bridgers).

The first third of the film was very difficult for a non-parent like me to watch, with the degree of forced intimacy and rationalization of this confining environment.  Here, the movie seems like a stage play, and would seem more real in standard than in the wide aspect ratio in which it is shot.

But when Ma comes up with an escape plan, by faking Jack’s death, the film becomes quite riveting in the middle section, before settling in to the somewhat tiresome extended family dynamics (with roles from Joan Allen and William H. Macy)  toward the end.  They also deal with the press, which tries to ask around the idea that Jack was the child of forcible rape. Nick does get caught and presumably go to prison (hopefully for life), but his capture isn't shown.

The film is set in Akron, Ohio but it appears to have been shot around Toronto (in late fall, before snow).  When Ma and Jack, after rescue, are in the hospital, there is a grand shot of a composite of the Toronto skyline with the Cuyahoga River canyon in Cleveland, somehow put together with CGI.

Official site is here (with A24, a company that likes risky subject matter, as the US distributor), and Irish and Canadian production financing and facilities.

Even though the story is fictional, it reminds one of the horrific case in Cleveland of Ariel Castro (Time story ).

I saw the film late Tuesday at Angelika Mosaic in Faifax VA before a small audience. Agelika has been showing a 2-minute short "commercial" of "The St. Bernard Project" by Toyota, a volunteer project to help residents in New Orleans return to the Lower Ninth Ward, here.

The film has nothing in common with Wiseau’s spoof “The Room”, reviewed here June 5, 2010.

Picture: Oberlin, Ohio, along Rt. 58, my trip, 2012.  I spent summers as a boy around Oberlin and am familiar with most of the state and the entire area around Cleveland.