"My All American": the football career of Texas Longhorn player Freddie Steinmark, who died of bone cancer at age 22 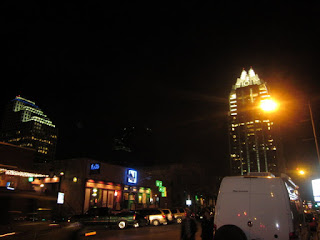 “My All American” (2015), directed by Angelo Pizzo, is a straightforward and moving biography of Texas Longhorns college football player Freddie Joe Steinmark (Finn Wittrock, very much a look-alike).  It is based on the book by Jim Dent “Freddie Steinmark: Faith, Family and Football”, published in 2015 by the University of Texas Press.

The film is framed as backstory of a 2010 interview at UT in Austin;  and the backstory ends when Freddie, one leg suddenly amputated at the hip when osteogenic sarcoma was found in his left femur, walks out into the Cotton Bowl on New Years’ Day 1970, a few days after he had played as a safety in the “game of the century” where Texas defeated Arkansas 15-14, Dec. 6, 1969.  Freddie had been limping with knee pain but playing anyway.  He had been taken out during the game when he had incurred a holding penalty, but contributed a key defensive play at the end of the game (in front of President Nixon).

I recall hearing people talk about Steinmark at work during my first job at RCA in 1970.  Steinmark would die in June 1971, at age 22, as his cancer is one of the most aggressive of pediatric tumors (although today modern chemotherapy has improved survival and amputation is no longer always done).  His story inspired Nixon’s support for a War on Cancer bill in 1971.

Steinmark was smaller than average for a football player, but his Catholic family (especially father, who had a baseball career precluded by a bad knee injury) near Denver pushed him into sport early.  He had wanted to play for Notre Dame and the Fighting Irish, but got a scholarship at the University of Texas and was viewed as unusually gifted in making the right movements for a defensive safety.  His roommate would lose a brother to the War in Vietnam, which informs the viewer of the moral politics of the time (as it also shows one scene with an anti-war demonstration).

In the film, Steinmark is shown as baby-faced and smooth-skinned, and mysteriously the same transformation (“thmooth”) applies also to Aaron Eckhart, whose appearance is a little shocking.

The early parts of the film do communicate a time (the 1950s) and Spartan mentality where boys and young men were expected to prove they were fit to join in collective pursuits to protect women and children by playing football, as a paradigm for battle.  It did not matter than boys got hurt or had concussions.

The official site is here (Clarius and Anthem).

I saw the film at a late afternoon performance at Regal Potomac Yard in Alexandria, and was the only person in the audience, a show just for me (and just $5 Tuesday pricing for seniors).  Picture: Austin TX, my trip, Nov. 2011.