"Free Birds": animated film does for turkeys what "Babe" did for piglets 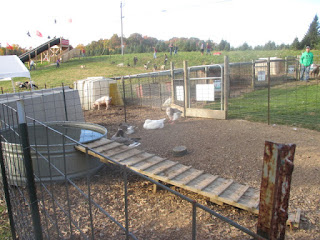 On Saturday night, November 21, NBC, instead of its usual Saturday night mystery on Dateline, aired a 3-D “kids’ movie”, “Free Birds”, an animated animal buddy 2013 movie from director Jimmy Hayward, and Relativity Media (that is, “I am Rogue”).   (How many of us find it practical to have 3-D TV at home?)

The premise of the film is that two turkeys travel back in time to Plymouth to prevent the settlers or Pilgrims from having turkey for their first Thanksgiving, and change history, for all future generations of turkeys.

But there is a social layering, too.  Reggie (Owen Wilson) is a domesticated turkey who gets pardoned by the President at Camp David, but is bullied by his peers as a coward.  He’s kidnapped by a wild turkey Jake (Woody Harrelson) who takes him to a time machine and journey back to 1621.

The time machine is called “STEVE” (George Takei) as if to refer to the founder of Apple.

The best animation is probably the material showing the Massachusetts coastal settlement in the 1620s.  It looks pretty real.  There are other interesting scenes, such as when domestic turkeys are urged to eat their food and get fattened up, recalling similar scenes in the 1995 Australian film “Babe” about a piglet.

The poultry industry is not pretty. And poultry processing can be a brutal, dangerous place for hourly (usually non-union) workers, mostly in the South. And we depend on them.

The title of the film recalled to me Reid Ewing’s short,  “Free Fish,” except that here the word “free” means what it says, not “without cost”.  I'm also reminded if the libertarianesque "Happy Feet" franchise.

The official site is here