"Disgrace": Major morality tale (and prize-winning novel) of post-apartheid South Africa has a grand look on the wide screen 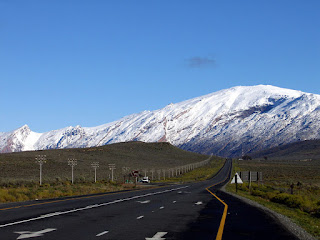 “Disgrace” (2008), directed by Steve Jacobs and based on the 1999 novel by J. M. Coetzee and starring an articulate, flamboyant John Malkovich is, I hope, not what “Being John Malkovich” (a  satire) is all about.  It deals with morality, both on a personal level and how that in turn mixes with post-apartheid politics in South Africa.  It’s visually spectacular, much of it filmed in a valley west of Capetown, and has the look of a “modern western”.

As a college professor, David Lurie (Malkovich) uses the life and writings of Lord Byron to talk about impulse control, purpose, and darkness of the heart. But he has his own problems, with all too robust heterosexuality, finally raping a student Melanie (Antoinette Engel).  He is called before a disciplinary board of the university and simply wants to plead guilty, but they want a confession from his heart.  He winds up essentially fired, banished and disgraced, and flees to his daughter Lucy’s (Jessica Haines) ranch in the East Cape (although the filming was in the Western Cape).  The look of the place reminds me of the Australian drogheda  “The Thorn Birds”.

Shortly after he arrives, the ranch sustains a home-invasion robbery and attack by three youths, part of the post-apartheid crime picture in South Africa.  One of the attackers forces Lurie into a bathroom and tries to set him on fire, and Lurie puts out the flames with the toilet water but sustains significant burns.  He recovers physically.  But one of the attackers is related to Petrus (Erik Ebouaney) , connected to Lucy’s farm business.  David must eventually become contrite and ask for forgiveness from the former student’s family.  In parallel, Lucy became pregnant in the attack, and will have the baby. Much as with the film yesterday, a woman must (or wants to) raise a child she did not consent to having.


The film can be rented from Amazon or YouTube for $3.99, and is on Netflix DVD (Image).  The film was produced with Australian financing.

The music by Michael Partos (vocal with chamber) is rather like Vaughn Williams. That's important because Lurie is also a musician and would-be composer.  There is one excerpt of Verdi, and one of Mozart.

The DVD has lots of interviews and a “Behind the Scenes” featurette. The principals of the film say that it is about many things, and that, despite the introductory material on morality as personal responsibility, much of the film and novel deals with the morality of resilience, of dealing with external forces (often from past injustices) that you cannot stop from visiting your door.