"Tell Spring not to Come this Year": the war in Afghanistan from the viewpoint of Afghan soldiers 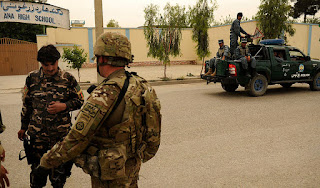 The war in Afghanistan has become “Obama’s War”, and it will probably be the next president’s war, too, given recent actions.  “Tell Spring Not to Come This Year” (2015), directed by Sayeed Taji Farouky and Michael McEvoy, tells the story on the ground in the southern part of the country (around Halmand) from the viewpoint of a few (particularly two) young men who join the Afghan army to fight the Taliban.

One of the young men points out that he has the equivalent of a ninth-grade education, and no prospects for employment.  So the Army is the best way to support himself.  That sounds like why a lot of people in the US join the military in the post-conscription (since 1973, when Nixon effectively ended the draft).  In the Iraq war especially, during the Bush years, “Stop-Loss”  (2008, Paramount, directed by Kimberly Peirce, with Ryan Phililppe)_ amounted to enforcing a backdoor draft. The young men point out that US troops, now leaving (but maybe returning, given more recent developments) tend to be arrogant and are not always welcome.

There are scenes of going on patrol, working with interpreters (between Farsi and Urdu), trying to root out local terrorist sympathizers.  A big battle at the end results in casualties for many of the recruits.  Many will never have their own families.

The film does bring back the mood of Sebastian Junger’s “Restrepo” (July 10, 2010) and "Korengal" (July 4, 2014), but in flatter country.  There are long shots of the foothills, rather looking like Arizona mountains.

There is a touching scene at the end where a soldier befriends and feeds a bird, who has no idea of what human religious conflicts mean.

The official site is here  (Tourist with a Typewriter, Ponda, NHK Cosmomedia, and Saboteur Media).  The film is available on Netflix Instant Play. This UK-financed film showed in Milan ad DOXA film festivals.