"Our Brand Is Crisis": Sandra Bullock keeps political brass knuckles in a dramatic remake of a documentary about South American corrupt politics 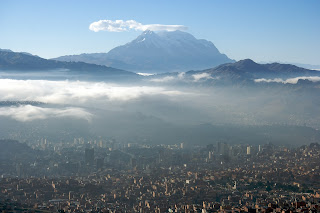 Again, Hollywood likes to remake known political-story sellers than invent new ones.  The drama film “Our Brand Is Crisis” from David Gordon Green remakes the 2005 documentary by Rachel Boynton.  My reaction to the title is, "what a use of trademark".

The opening sequence, where Carville’s goons (led by Nell, Anne Dowd) visit Jane in her mountain home (in Colorado?) to hire her is interesting;  Nell says that Jane is someone that CIA ops would have regarded as expendable – single and childless.

Once Jane lands in La Paz, she wears an oxygen mask in meetings and deals with the nausea and pubic vomiting of altitude sickness for a while.  La Paz is well shown in the film, with poorer neighborhoods built up on hills.

Quickly she assimilates, and mixes with the people, having to counsel one young activist Pepe (Octavio Gomez Berrios) that she really does this for a living, and that ideas on their own have little meaning. "That's how it is."  Political crisis creates a brand that you can sell on your personal resume.

There are some hair-raising demonstrations scenes with the cops, and a bus chase on a mountain highway that could have sent a bus over a cliff to drop a couple thousand feet.

The film is shot in normal 1.85:1 but could have used wider aspect ratio, or even Imax for the location scenes.  The indoor scenes were filmed in Puerto Rico and Louisiana.

Official site is here  from Warner Brothers.  The film was shot with Participant Media. WB no longer uses a separate brand (“Warner Independent Pictures”) for its “indie” style films, which would fit here.

The film did not venture to nearby Lake Titicaca, or the archeological relics at Tiahuanaco. I almost made a trip there in 1974, but canceled when I took a new job at NBC and satisfied myself with Mexico City instead.

I saw the film before a moderate Saturday afternoon audience at Angelika Mosaic.